On 30 August 2013 MAN Diesel & Turbo signed an agreement regarding the production of its Kappel propeller portfolio with Dalian Marine Propeller Co., Ltd (DMMP) – part of the China Shipbuilding Industry Corporation (CSIC) Group – at its facility in Frederikshavn, Denmark. The deal allows DMMP to produce and sell MAN Alpha Kappel design propellers in China.

Representing DMMP, Executive Vice President Chen Baoqi said: “Entering into this agreement with MAN Diesel & Turbo, ensures and strengthens DMMP’s leading position in the market place and delivers the most efficient and environmentally friendly propeller solutions to our shipowners.”
Torben Johansen, Head of Propeller & Aft Ship, MAN Diesel & Turbo, said: “This agreement will greatly help us to penetrate the FP propeller market with our highly efficient Kappel design principle as DMMP is among the major suppliers of large-scale propellers for Chinese shipbuilding.” 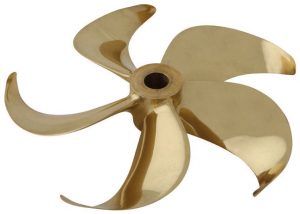 The five-bladed with Kappel tip fin design. As with the CPP range, the MAN Alpha FPPs also cover a power range of 4 MW and upwards.

DMMP
DMMP is the largest plant specializing in the manufacture of marine propellers in China and has nearly fifty years of production experience. The company delivers about two hundred propellers annually to a broad range of global shipowners.

Kappel
Taken over by MAN Diesel & Turbo in 2012, Kappel propeller blade designs offer fuel savings of up to 6%, compared to conventional designs. Notably, this improvement in efficiency is related to blade design alone.

Compared to a conventional design the Kappel propellers have shown lower pressure impulses which can be utilized for bigger and more efficient propellers because of the reduced clearance between hull and propeller tip.

About MAN Diesel & Turbo
MAN Diesel & Turbo SE, based in Augsburg, Germany, is the world’s leading provider of large-bore diesel engines and turbomachinery for marine and stationary applications. It designs two-stroke and four-stroke engines that are manufactured both by the company and by its licensees. The engines have power outputs ranging from 450 kW to 87 MW. MAN Diesel & Turbo also designs and manufactures gas turbines of up to 50 MW, steam turbines of up to 150 MW and compressors with volume flows of up to 1.5 million m³/h and pressures of up to 1, 000 bar. The product range is rounded off by turbochargers, propellers, gas engines and chemical reactors. MAN Diesel & Turbo’s range of goods includes complete marine propulsion systems, turbomachinery units for the oil & gas as well as the process industries and turnkey power plants. Customers receive worldwide after-sales services marketed under the MAN PrimeServ brand. The company employs around 14, 000 staff at more than 100 international sites, primarily in Germany, Denmark, France, Switzerland, the Czech Republic, India and China. MAN Diesel & Turbo is a company of the Power Engineering business area of MAN SE.

For New Super-Efficient Container Ships, UASC teams up with HHI and FutureShip

The world of Marine Engineering Science and Technology – get snapping to win a Nexus tablet!