For New Super-Efficient Container Ships, UASC teams up with HHI and FutureShip 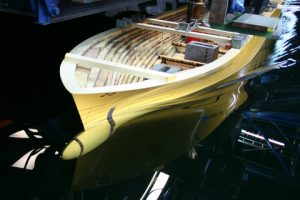 Dubai/Hamburg,  04 October 2013 – United Arab Shipping Company (UASC) have recently announced they will expand their fleet with new super-efficient container vessels. Constructed to DNV class, the designs have been optimised through a productive co-operation between FutureShip and Hyundai Heavy Industry (HHI). Setting its sights on competitive slot cost, UASC, one of the world’s fastest growing container carriers, has ordered five 14000TEU vessels with six options and five 18000TEU vessels with one option.

Recognising that fuel consumption is perhaps the single most important factor determining the profitability of new vessels, UASC partnered with FutureShip, design consultancy and energy efficiency experts,  in order to realise the most efficient design possible. A number of designs were assessed based on their total costs of transport per container-mile for UASC’s specific trading pattern, taking into account both capital investment and operational costs.

Four sets of designs were shortlisted for intensive evaluation by FutureShip with numerical tank towing tests based on Computational Fluid Dynamics (CFD) simulations for the ship with propeller. In only four weeks, FutureShip ran thousands of tests to determine the speed-power relationship for the two ship classes at two drafts for each of the four competing designs, adding up to some 1.7 million CPU hours, or 200 CPU years. The use of massively parallel computation allowed multiple tests to be run at the same time, over speed and draft ranges which reflected realistic operational profiles.

The four designs were all well matched, with HHI’s design emerging as the winner due to a 14000TEU vessel design that outperformed the competition and the most efficient (single-skeg) vessel design at 18000TEU. Taking these leading designs as the starting point, UASC, HHI and FutureShip joined forces to further optimize the designs. A formal parametric optimization was also conducted to fine-tune vessel performance for UASC’s operating profile in the intended service pattern of the ships.

FutureShip’s dedicated parametric optimization employed more than 60 free parameters with the objective of reducing fuel consumption as much as possible, taking into account hydrodynamic power requirements, the specific fuel oil consumption of the respective engines and UASC’s specific operational profile for speed-draft combinations.

In a joint effort, HHI and FutureShip revisited the powering concept and more than 35, 000 hull shape variants were investigated for each hull design. As a result, better performance could be achieved for both the 14000TEU and the 18000TEU vessels compared to the initial proposal.

For final validation, professional model tests were conducted at the Hamburg Ship Model Basin. The model tests backed up FutureShip’s CFD predictions, supporting the accuracy of the optimisation results.

To realize further efficiency gains on the operational side, UASC also decided to implement FutureShip’s award winning trim solution, “ECO-Assistant”. Backed up with a comprehensive database of possible operational conditions evaluated by CFD analysis, this tool provides an intuitive interface to select the most efficient trim for every voyage.

The new ship designs are currently being finalized at HHI with deliveries scheduled between 2014 and 2016, including all options.

As of 12 September 2013, DNV and GL have merged to DNV GL
The new company DNV GL has started operating as one company with effect from 12 September 2013. DNV GL forms the world’s largest ship and offshore classification society, a leading technical advisor to the oil & gas industry and a leading expert for the energy value chain including renewables. DNV GL also takes the position as one of the top three certification bodies in the world. Read more here: www.gl-group.com/merger

The Swedish Club makes its biggest investment in safety