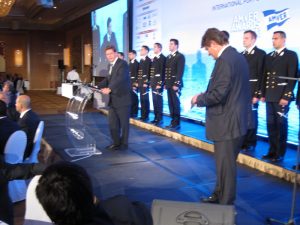 Miltiades Varvitsiotis at the podium with George Xyradakis on his right and officers from the Greek Coast guard on stage – Photo credit: Panos Nikoulis

Over 850 guests attended the event which this year honoured 1209 Greek vessels under 178 shipmanagement companies based in Greece. These awards honours the Masters of “soul and mind” that Greek Seamanship offers. The event was attended by our  www.allaboutshipping.co.uk Greek team who witnessed  the event on camera. 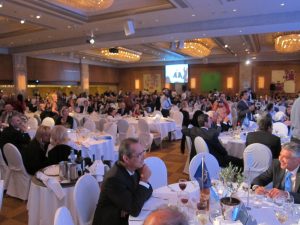 The event was directed by the new chairman XRTC’s supremo George Xyradakis, and the applaud goes to Yanna Pavlopoulou, the Propeller Club’s new Secretary-general who stressed in her speech that the Club will focus to support the new talented greek students and the introduction of many more scholarships leading to the real connection between the HR and the shipping companies. If only each company introduces its own scholarship, things can be really great. 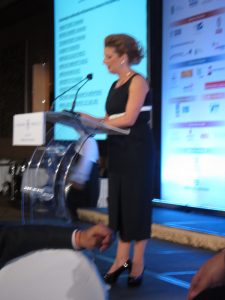 A great honour was bestowed to the late Dimitris J. Koustas founder of Danaos Group received by his widow Mrs. Amalia Koustas, whilst the thanking noted was delivered by Dimitris J. Koustas, grandson of the deceased. During the ceremony the coach and team-members of Greece’s open sea team where also honoured – Nikos Yemelos with his athletes Spyros Gianniotis, Kalliope Araouzou and Antonis Fokaides.  On stage, during the entire ceremony where officers in uniform from Greece’s Coast Guard – their Commandant Dimitrios Bandias missed the event due to an official trip abroad. 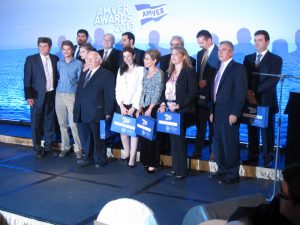 Members of the Propeller Club’s BoD with winners of the Awards – Photo credit; Panos Nikoulis

We will advise you on all the awards as soon as we receive the information from the Propeller Club’s Secretariat.

Safe methods of working under the EWEA offshore conference spotlight