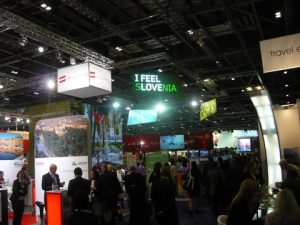 World Travel Market 2013 has opened earlier on today Monday 4 November with a greater focus on business than ever. The event is predicted to generate more than £2 billion worth of deals this year alone while London will be more than £160 million better off as it plays host to almost 50, 000 industry professionals attending the show.

Besides the news and pictures, we bring you live some rare moments, reporting and dialogues of this unique event’s start, the best ever witnessed over the last ten years, with the makers and shakers of this  industry’s event. After all, Tourism of all kinds, part of the vast Travel Industry comes second – the first being the Shipping Industry. The combination of these two sectors of business can greatly assist the economies of many nations – even the poor ones, given the uniqueness of the products and services they can offer, as well as the further development of their infrastructure to support all these products and services.

The first video reporting is from the Brazilian stand. Brazil, already the place to be, given her position within BRICS, the coming world cup in soccer and needless to say the biggest area for an adventurous extravaganza in the Amazonas and beyond! Combining also the advantages of a shipping nation, not just an upcoming industrial power, you can imagine what it can offer!

The day got off to an auspicious start with the first of two Speed Networking events aimed at introducing exhibitors to the right buyers for their businesses. Superbreak Head of Theatre and Events David Thomas said the broad spectrum of businesses attending the event meant there is always someone worth meeting. He added: “Even with the web, there are still events happening out there which we don’t know about until someone tells us. I had a meeting with a chap who told me about a Vincent Van Gogh exhibition in Brabant next year which I’m pretty sure we can do something with.” 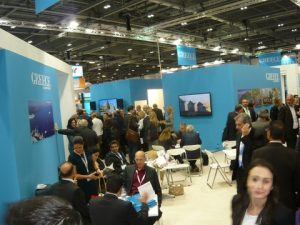 Our second video above is from the Argentinian pavilion;  Argentina too, another traditional shipping nation having also ten of the world’s most desire cruise and coastal touristic destinations is a place to watch! The late Evita Peron had a cliché for it: Don’t cry for me Argentina…

Groupon Head of Travel Greece Irina Pavlova added: “I’m really pleased with how it’s gone. Although I am responsible for Greece, a lot of the contacts made will also be of interest to other country managers, so it’s been a great day for the business.”

Our third video herebelow comes from the Bahamian stand; Bahamas, another great maritime nation, is a paradise too for any kind of tourism! Been there, seen that, go and dive south of Andros island and then tell me your view… The scuba effect too is second to none!

Nor was the optimism restricted to the opening speed networking sessions. Former Marks & Spencer boss Sir Stuart Rose was the guest speaker of the WTM Captains of Industry Lunch, which was attended by 200 leaders of the travel industry. He said: “The recession is over. I am pleased to say UK PLC is back in the black and it’s not just about London. People are definitely more upbeat, next year will be a better year.”

While he chastised the UK Government for failing to push more green-focused legislation he added the industry should not see the incorporation of green policies in their businesses as an expensive venture. Instead he said Marks & Spencer made £50 million more in its 2008/09 results as a result of the policies. 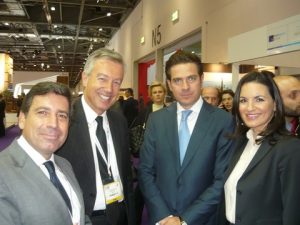 Elsewhere Greece reported an 11.6% increase in visitor numbers between May and August for the Region of Attica, home to Athens. The Greek National Tourism Organisation will further capitalise on this trend with the launch of the new athensattica.com website while a new smart phone app will be launched in 2014.

Greece’s Minister of Tourism press conference was the epicentre of day one in the Platinium Suite’s great hall. A cool, bold and determined Olga Kafalogianni flanked by her faithful and dedicated team unleashed her Xenius Zeus’ lighting with Greece’s success story, the support of the Greek State towards the electricity- mulfunction hit Santorini last summer, which spoiled the season in Santorini; the introduction of athensattica.com, the gastronomy again for and from Santorini as well as that of the entire Greek mainland and Greece’s five Archipelaga and the value-for-money advantageous holidays in Greece for all. 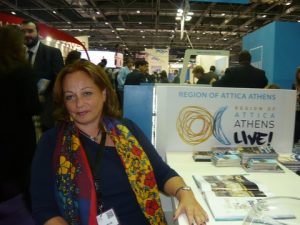 Anna Papadimitriou-Tsatsou, Vice Governor of Attica region, the heart and soul of the new initiative athensattica.com

Business tourism too, religious tourism being also another option, the Cruise and Yacht industries making Greece the pole for all in the Med and beyond. What is a fact is the 17 plus (yes you read correctly: seventeen million) tourist this year, proving the continuous support of all to austerity stricken Greece (in another forthcoming presentation, we will expand on Greece, the Country blessed by the Gods). As soon as the Greek ports becoming hub ports –  with that of Piraeus and Thessaloniki being the first on the list, Greece will become the number one destination in Europe and the Med, laying the ground for number one in the world!

Spain also saw a strong year with up to 13 million Brits, a 5% year-on-year increase, expected to have visited this year. Its pavilion was a must to see and talk place; more products thanks to the variety of the weather there too! The UK market accounts for 24% of all the destination’s visitors.

You can’t do without the US, not even a for a second, so our fourth video goes to the super power and its variety of holidays spread across a lucky country and its special scenery!

As mentioned above, we are a shipping medium and our friends, clients and colleagues are all over the place. At least twenty members and friends from the shipping fraternity were… on board the “WTM” vessel. James Brewer the charismatic writer of all shipping and arty matters was there, so did John Cauci-Maistre from Malta – he can’t miss an exhibition, so the nick-name: Master of the exhibitions. Our fifth video below goes to shipbroker Wendell Abraham of Link Chartering Limited…

Egypt tourism officials are hoping to meet the UK government in the next few days to persuade it to lift its advisory against all but essential travel to most of the country. Despite restrictions imposed since the summer, the country is still set to reach one million UK visitors this year, the same as 2012.

Reed Travel Exhibitions Exhibition Director World Travel Market Simon Press said: “The optimism is out there in the market for 2014 as consumers increasingly think the economy is on the up.

“The first day of WTM has been a great success and will prove the perfect stringboard for the rest of the event.”

Did you say Dinner and Show? Champagne and Show for the New Year’s Eve? Then the Lido girls are waiting for you; Le Lido c’est Paris! We dedicate this video to them!

The final video* at the end of this reporting goes to Greece, the country with the unique Touristic Religion – after all Xenios Zeus was Greek.

Slovenia had the best décor and words to attract those in love too!  Cyprus too with Aphrodite’s legacy and variety of products had an impressive stand; Bulgaria, the up and coming Balkan nation the most friendly approach – Radost Ivanova from the Municipality of Plovdiv, the best smile; Turkey too had a great pavilion capitulating on all nations legacy that past from its soil, with turkish service manners being one of the best in the world; all in all every nation tried its best to impress, the choice though is yours!

WTM, now in its 34th year, is the event where the travel industry conducts and concludes its deals.

In 2012, RE held more than 460 events in 36 countries bringing together more than seven million people from around the world generating billions of dollars in business.

*All videos herein are by Anny Zade as well as the pictures.