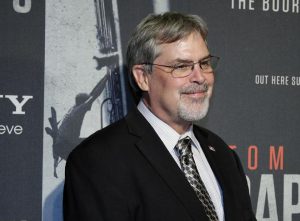 This movie, starring Tom Hanks as Captain Richard Phillips and Barkhad Abdi as the head Somali pirate, is an adaptation of  Captain Phillips’s own book (with contribution by Stephan Talty), A Captain’s Duty: Somali Pirates, Navy SEALs, and Dangerous Days at Sea.

The story is drawn from the 2009 hijacking of the US container ship Maersk Alabama by four Somali pirates.  Acting, particularly in the two leading roles, is excellent throughout and the pace of the movie by director Paul Greengrass is breathtaking.

The Maersk Alabama during the pirate attack from a scene of the movie.

The shipping world has been well aware of the problem of piracy for quite a while.  The movie exposes this problem in a dramatic manner to a much larger audience.

Piracy has evolved from a family affair to big business with a total of $413m in ransom payments from shipping companies between 2005 and 2012, according to an article in yesterday’s Independent:

Before 2008 Somali piracy was largely a family affair. Family members shared the cost of the operation, with some supplying materials such as ladders and weapons. The total outlay for such an operation could have been as little as $300. Even if smaller vessels were targeted, the potential returns were considerable.

But then more substantial criminals spotted the opportunities and developed what the World Bank report calls a “shareholder” model. This involved participants making investments and receiving a proportionate payback. The report says a committee of financiers was formed to collect “enough money to sponsor a pirate expedition”. An expedition involving cartels and two skiffs cost an average of $30, 000.

The pirate crew from a scene of the movie.

As ship owners find ways to defend themselves from piracy, pirates are also becoming more organized.  The ultimate solution would be to help the countries around the Horn of Africa develop economically and offer their people a more promising future so they don’t need to resort to criminal activities, of which piracy is only one example.  This won’t happen in the near future; until then, the international shipping community must come together and continue to find more creative ways of countering such attacks.