Feeding perpetual sea trial data to ships – Dr Rahim of ClassNK tells IMIF of this and other green, efficiency projects 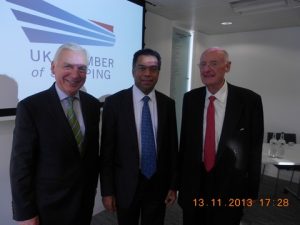 Shipping is a world leader in the proportion of money it spends on research and development, and classification societies are at the heart of initiatives promoting better ships, Dr Abdul Rahim, regional manager for Europe and Africa at ClassNK, told the latest meeting of the International Maritime Industries Forum.

One of the key projects unfolding is to mimic sea trials every five to 10 minutes to yield valuable efficiency information during regular operations of ships.

The role of Class NK carries substantial weight because according to latest published figures, it had the largest classed fleet, at 8, 270 ships totalling 212m gt, until being overtaken recently in fleet size by DNV GL,  the newly merged entity of Germanischer Lloyd and DNV. 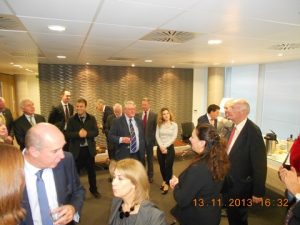 just before the buffet lunch

Dr Rahim boldly addressed the theme “Green ship technology to reduce greenhouse gas emission from ships, ” when he spoke at the November 13 2013 IMIF meeting, at the London headquarters of the UK Chamber of Shipping.

Dr Rahim began by outlining the changing role of class since the world’s first classification society was founded in 1760. Today class had a new role as both a regulator and innovator.

Falling charter rates, rising bunker prices and declining ship prices in 2008, alongside costly new regulation, demanded innovation to keep costs under control, but who could provide funding and support? “That is where we stepped in, ” said Dr Rahim. 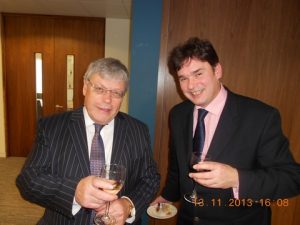 Research and development expenditure at ClassNK as a percentage of annual revenue rose to 15% in 2012, from around 8% in 2008. “No [other] industry in the world is spending this percentage on research and development, ” said the ClassNK executive. His society was a catalyst in driving things forward in a wide spectrum of industry. The Joint R&D for Industry Programme founded in 2009 was now the largest R&D expense, accounting for 55% of the business’s R&D budget. Projects proposed and carried out by industry with support and funding from NK, as of end July 2013 were: 122 completed, 93 in progress and 78 in planning. 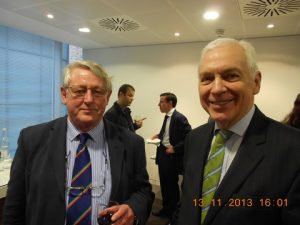 Among others, Dr Rahim listed 16 maritime industry partners, and 15 university partners. Then he went into specifics.

Under the Ship Recycling Convention, ships will need a document which details all the hazardous materials on board: the Inventory of Hazardous Materials (IHM), and would need to develop a recycling plan. This would be too costly to carry out manually. One IHM plan could entail between 500 and 1, 800 documents, and require large storage space on every ship.

ClassNK had developed its PrimeShip – GREEN/SRM cloud-based system for ship recycling management. It was paperless, based on uniform data  and minimal correspondence, and created, updated, maintained and certified on a single platform: “one platform for the entire maritime industry.” So far, more than 90 shipbuilders and 1, 300 ship suppliers were registered on the system. 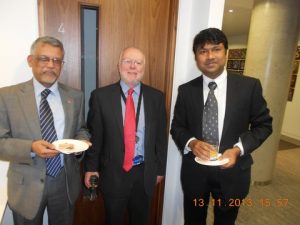 Meanwhile, the industry was rushing to meet the demands of the Ballast Water Management Convention. As of 30 June 2013, 37 states with total tonnage  of 30.32% of the global fleet, had signed up, nearing  the requirement for the convention coming into force of 30 states with 35% of tonnage. This raised retrofit challenges: limited existing drawings, measurement accuracy of existing equipment, involvement of engineering experts, time in dock and retrofit costs.

ClassNK’s response to the convention was to develop a laser scanning system to produce a 3D model of the engine, giving the latest picture of the engine room. The process was on board recording of data, transforming this to 3D CAD data from point group data, then carrying out a design for installation work of ballast water management system on the software. Time and costs were saved: np drydocking, no cutting of major shell plates, modifications and retrofit work on board minimised. 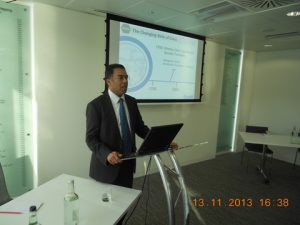 Dr. Rahim at the podium delivering his slides presentation

Dr Rahim then outlined the ClassNK archive centre for storing electronic drawings in a cloud-based system, a result of collaboration with IBM. Hitherto, an area of 2 to 3 m sq per vessel would be needed for storing drawings, with limited access.

Focusing directly on greenhouse gas reduction technology, Dr Rahim referred to the recently completed  Japanese GHG Reduction Programme, which embraces  22 projects, 12 yards, 7 owners, 11 manufacturers, ClassNK, government, and non-profit organisations. The shipyards have already produced new designs for several new eco-ships. The Real question: how much will these technologies save on an actual vessel? Test results in the area of hybrid turbocharger indicated savings of 2% to 3%; from advanced low friction paint 6% to 10%; from new engines 6% to 10%; and from the Misubishi Air Lubrication application 3% to 13%.

A key problem was the “sea trial paradigm.” Ships with the same fuel efficiency at sea trials can perform differently in real sea operations. 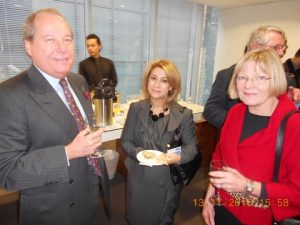 “What if we could carry out a ‘sea-trial’ every 5-10 minutes during regular operations?” asked Dr Rahim . “With a software system, we could use that data to accurately predict real performance in real conditions. We could achieve better operations, know when exactly to  clean the hull and polish the propellers.”

With what was referred to as the Dynamic Performance Model, the system learns through intelligent hydrodynamic analysis based on real voyage data (wind, waves, shaft torque, fuel flow).  The ship performance model is improved continuously, making it possible to optimise speed, routing, and other  parameters while greatly reducing costs. It was thus easy to evaluate the effectiveness of new GHG reducing technologies in real conditions. 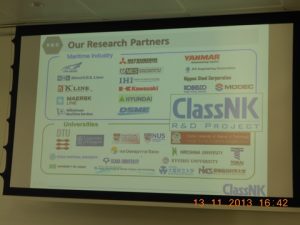 Co-operation at its best

IMIF chairman Jim Davis said that there should be less emphasis on ship speed and more about the savings that could achieved by steady sailing. “It is the transport element that needs to be questioned alongside this excellent technical work.” Mr Davis added that ecologists complained that ships were big global polluters, but “are they aware of the benefits to them of the things you are talking about?” he asked Dr Rahim.

The ClassNK representative said of the drive to spread knowledge of improvements: “I think it has to be a concerted effort from the maritime industry.”

On behalf of the gathering Mr Davis thanked Dr Rahim for his “brilliant exposition, ” adding: “It is good to know a classification society is going far beyond classing ships, to try to help with much more R&D than ever before.” He further thanked Michael Parker of CMA CGM (UK) Holdings for hosting the meeting.