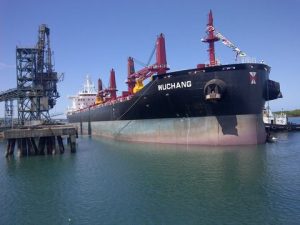 Deltamarin’s B.Delta37 design has attracted significant attention in the industry, due to the best in class (handysize segment) performance, in terms of a range of parameters such as low fuel oil consumption, low emissions, EEDI, deadweight intake and lightweight particulars. On top of this, the vessel has excellent manoeuvrability and performance in heavy seas, as experienced during the sea trials. This is achieved through a very optimised and energy efficient design, with particular focus on optimal hydrodynamic performance and lowest possible lightweight, without compromising either the cargo intake nor the hull structural integrity. Detailed structural finite element analysis and fatigue design assessments, in accordance with IACS’ Common Structural Rules, have been used to verify the hull structural integrity.

The high performing design characteristics have been validated during the inclining experiment and sea-trial conducted prior to delivery. The estimated lightweight particulars (weight and centre of gravity) are confirmed to be within the acceptable limits of the actual lightweight details, derived from the inclining experiment. This was in accordance with the contracted cargo capacity, which has also been confirmed.

Although the Wuchang was contracted prior to the EEDI requirement coming into force 1 January 2013, CNCo and Deltamarin requested EEDI verification on a voluntary basis from Lloyd’s Register. Accordingly, the EEDI value has been calculated and verified based on model testing and during sea-trials and the derived EEDI value is confirmed to be over 20% below the applicable baseline for bulk carriers.

Wuchang has newbuilding number CX0341 from Chengxi Shipyard and is the first in the series of 16 ships of this optimised B.Delta37 design from Deltamarin, ordered by CNCo to Lloyd’s Register’s class at Chengxi Shipyard and followed by additional four at Ouhua Shipyard. So far, 53 B.Delta37s have been contracted in total in five different Chinese Shipyards.

About Lloyd’s Register
Lloyd’s Register provides independent assurance to companies operating high-risk, capital-intensive assets in the energy and transportation sectors. We enhance the safety of life, property and the environment by helping our clients to ensure the quality construction and operation of critical infrastructure.
www.lr.org

About Deltamarin
Deltamarin Group provides services for shipping, shipbuilding, naval, marine and offshore industry worldwide. The services cover the entire field of engineering from feasibility studies through concept development, FEED and basic design up to complete engineering and contracting packages, including site supervision. Deltamarin employs around 400 designers in its own and associated companies. Offices are located in Western Europe, Brazil, China and Malaysia. Deltamarin is a subsidiary to AVIC International Maritime Holdings Limited.
www.deltamarin.com

About CNCo
The China Navigation Company (CNCo) is the wholly owned, deep-sea shipowning and operating arm of the multi-national Swire group. CNCo was founded in 1872 in Shanghai and started its operations trading on China’s Yangtze river. Since then the company has expanded globally while its primary operational focus remains in the Asia-Pacific region. The Company operates a global network of multi-purpose liner services for the transportation of containerised, breakbulk, heavylift and project cargoes in addition to providing drybulk and bulk logistics services.
www.chinanav.com

Feeding perpetual sea trial data to ships – Dr Rahim of ClassNK tells IMIF of this and other green, efficiency projects