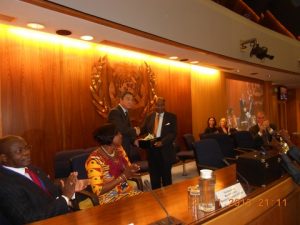 IMO Secretary-General Mr. Koji Sekimizu presented the award, a sculpture in the form of a dolphin, to Dr. Mensah, during a special ceremony at IMO Headquarters (on Thursday, 21 November 2013) at the end of the first day of the 27th extraordinary session of the IMO Council.

Dr. Mensah was nominated for the prize by the Government of Ghana and has been recognized for his contribution to the aims and objectives of IMO throughout a distinguished career in international maritime affairs, over many years, as a specialist in public international law, the law of treaties, shipping law, the international law of the sea and international environmental law. 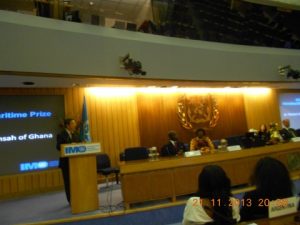 The nomination highlighted Dr. Mensah’s long career at IMO (initially as head of the Organization’s newly-formed Legal Affairs Division and then as Assistant Secretary-General) followed by his appointment as a Judge at the newly-established International Tribunal for the Law of the Sea (ITLOS) , from 1996 to 2005. He was also elected as the first President of the Tribunal, from 1996 to 1999. 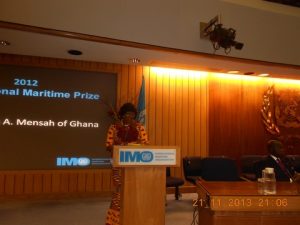 The Honourable Mrs. Dzifa Attivor, Minister of Transport of the Republic of Ghana addressing the audience

Dr. Mensah and the Honourable Mrs. Dzifa Attivor, Minister for Transport of the Republic of Ghana, also addressed the audience at the ceremony.  The High Commissioner for Ghana, His Excellency Professor Kwaku Danso-Boafo also attended the ceremony.

The International Maritime Prize is awarded annually by IMO to the individual or organization judged to have made the most significant contribution to the work and objectives of the Organization. It consists of a sculpture and includes a financial award, upon submission of a paper written on a subject relevant to IMO. 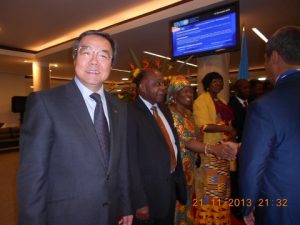 The Secretary-General of the IMO and Dr. Mensah, his wife and officeceptionials from Ghana greeting guests as they enter the reception hall

Biography of Dr. Thomas A. Mensah

Dr Thomas A. Mensah was born and raised in Ghana. He graduated from the University of Ghana and then studied abroad, first taking law at the University of London, graduating in 1959, and then, in 1961, he joined Yale University Law School, United States, obtaining a Master of Laws (LL.M.) degree in 1962 and a Doctor of the Science of Law (J.S.D.) title in 1964.

Dr. Mensah then embarked on a truly international legal career, first working as Associate Legal Officer, at the International Atomic Energy Agency, Vienna from 1965 to 1966 before joining the IMO Secretariat, in London, in 1968, as Director of the Legal Office. In 1981, he was designated Assistant Secretary-General and Director of the expanded Legal Affairs and External Relations Division, IMO, posts which he held until 1990. He was also a visiting Professor of the World Maritime University (WMU), in Malmö, Sweden, from 1981 to1990. 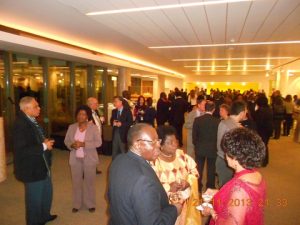 Dr. Mensah was then appointed as the first High Commissioner of Ghana to the Republic of South Africa, from 1995 to 1996.

Dr. Mensah has published numerous articles, monographs and papers in the field of public international law, law of the sea, maritime law and international environmental law.

Predicting the movements of a giant GPS-tagged iceberg