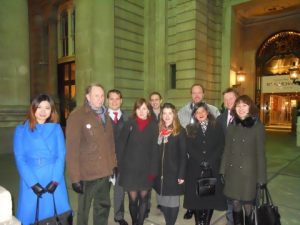 As a Thank You gesture to the particpants in the SPNL FutureLondon initiative, a guided walk to discover London’s maritime past was arranged. Sure, we all know about Lloyds of London and the Baltic Exchange, but with a global maritime history spanning back centuries… there is so much more. Who better to lead the way than  Sean Gay,  a qualified City of London Guide currently with Footprints of London, who has an extensive martime background. He is also a liveryman with the Worshipful Company of Shipwrights.

The main purpose behind the SPNL FutureLondon initiative was to develop insights and generate ideas from the future leaders of shipping, and to use this to ensure London maintains its status as a key global shipping capital. The insights can be used to ensure the best and brightest are attached to London also in the future. This will generate quality jobs in the greater London area and will contribute to an increased diversification of sources of London’s business revenue. The findings are to be released on 3rd December at the next SPNL event hosted by the UK Chamber of Shipping. 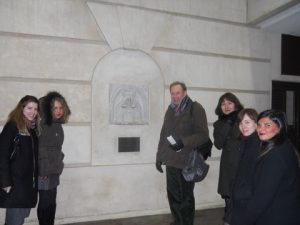 The main focus SPNL FutureLondon was in Greater London. The reason for this is that this is where SPNL and its members are based, and this is where we have some expertise. The information presented in this report will in many cases act as a proxy for the rest of the UK with shipping activities. If London is to succeed in being one the pre-eminent global shipping capital going forward, it relies on attracting and retaining the best and the brightest

Four sessions were held during the course of the spring and summer 2013: 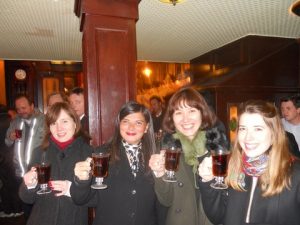 The Thank You walk to discover London’s maritime mysteries started at the Royal Exchange, right at the power centre of The City with The Mansion House, The Bank of England and the Royal Exchange itself dating from 1571 and used by thousands of merchants over the centuries not least for trading sugar cargoes from the hugely lucrative triangular slave trades in the 18th-19th centuries.

Onward through back alleys where coffee houses (think Turkish…) were the centres of different trading, to Leadenhall Market  an ancient poultry market sitting above the orginal Londinium Roman forum and next to Richard Rogers Lloyds of London building. Not only was the shipping insurance market spawned from Edward Lloyds coffee shop but Lloyd’s Register (LR Classification Society) and Lloyd’s List  newspaper as well.

Thence to the ‘Gherkin’ former sight of the bombed Baltic Exchange – a marble palace the remains of which are now in Tallin. The origins of this were the Baltic & Virginia Coffee House dating from 1744 when ships were matched with cargoes 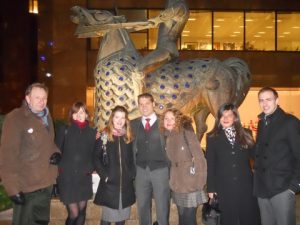 And onwards to Cutlers Gardens to see Denys Mitchells magnificent ‘The Cnihtengild’ horse statue set in the midst of the old warehouses of the East India Company which started in 1600 and eventually to be a huge stockholding monopoly which ruled large parts of India using it’s armed merchant ships and enormous private army.

Shipping is ‘trade’ and was supported by merchants, bankers, insurers, lawyers, brokers, merchant ships, fighting ships, shipyards and a huge all enveloping ‘will to succeed’

SPNL Chairman Claudio Chiste, who was co-Project Leader for the SPNL Future London initiative (along with Immediate Past Chair Gustav Ellingsen), added further context to this initiative: “Although professional networking events are the ‘core’ of SPNL’s activities which focuses primarily on promoting competency amongst London’s young shipping professionals, in line with our third strategic objective, SPNL also seeks to promote and enhance London as a global maritime centre wherever possible. This may be by fundraising for our chosen charities, supporting students (who are effectively tomorrow’s young shipping professionals), raising awareness of the importance of shipping. In the case of SPNL Future London initiative (which was almost two years in the making), this was by inviting volunteers to participate in four thought provoking brainstorming sessions on how we can London more attractive in nurturing, attracting and retaining both talent and investment.”