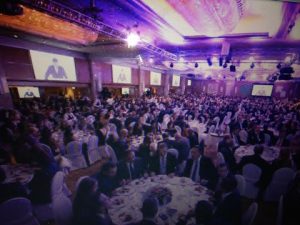 THE winners of the Lloyd’s List Greek Shipping Awards for 2013 have been announced at a glittering gala dinner and awards presentation which attracted 1, 100  of Greece’s leading shipping personalities, executives and their guests.

The packed audience for the 10th annual Greek Shipping Awards, organised by Lloyd’s List, the international maritime newspaper established in 1734, heard welcoming speeches by the minister of Shipping and the Aegean, Miltiadis Varvitsiotis, and Noboru Ueda, president of ClassNK, the event’s overall lead sponsor.

Guests enjoyed a pre-dinner cocktail reception hosted by the American Bureau of Shipping and a Champagne Toast’ to Greek Shipping sponsored by the China Classification Society and the event, held as is traditional at the Athenaeum InterContinental Hotel, was also supported by numerous Greek and international companies sponsoring individual awards, as well as by a number of prestigious industry organisations.

George Prokopiou was named Greek Shipping Personality of the Year for 2013, reflecting a recent period of expansion, particularly of LNG company Dynagas. Notable events included the first transit of the Northern Sea Route by an LNG carrier, delivery of three new ice-class newbuildings, and the listing of newly-formed Dynagas LNG Partners on Nasdaq.

Lloyd’s List’s Greek Shipping Newsmaker of the Year award went to Petros Pappas, of Oceanbulk, for a year which included major orders and acquisitions in three different market sectors, mainly in partnership with Oaktree Capital Management. The Award is decided by the editorial staff of Lloyd’s List.

Alexandros Tourkolias, a longstanding shipping banker, was awarded the Lloyd’s List / Propeller Club Lifetime Achievement Award for an outstanding career that not only includes ship finance but leadership of the country’s largest bank as chief executive of the National Bank of Greece.

Robert D. Somerville was elected International Personality of the Year, the only award open exclusively to non-Greeks. Mr Somerville, a strong supporter of Greek shipping, recently retired as chairman of ABS and was the longest leader of the classification society in its 151-year history.

The recipient of the Dry Cargo Company of the Year Award for 2012 was containership owner Costamare Inc., which had a highly active year, taking delivery of a series of 9, 000 teu newbuildings. In addition, it launched innovative joint ventures with fund manager York Capital, for acquiring more container vessels, and with V Ships to create a new technical management unit.

Passenger Line of the Year was Small Cyclades Lines, a service maintained by the Skopelitis family that provides a lifeline for five small islands in the Aegean.

John Pachoulis, former president of the Hellenic Shipbrokers Association, won the Shipbroker of the Year Award.

Dutch bank ABN AMRO was chosen as winner of the Shipping Financier of the Year Award, having re-established itself in the Greek market during the current crisis and emerging as an active lender to Greek shipowners.

The University of the Aegean received the prestigious Piraeus International Centre Award.

Bunkering giant Aegean Marine Petroleum Network was adjudged winner of the Award for Safety or Environmental Protection for its spotless record of zero spill incidents.

Helmepa was declared winner of the Award for Achievement in Education or Training for its seafarers’ seminars as well as educational role in schools.

The Seafarer of the Year Award was won by Capt Dimitrios Manolas and Capt Pavlos Kountouris for their participation in the response to an emergency call in Fenbruary 2013 and the ensuing rescue of four Irish sailors from their yacht ‘Wolfhound’..

Ariston Navigation’s handysize dry bulk carrier Ardennes, the first in a series of new eco-design newbuildings caught the judges’ eye as the Ship of the Year for numerous fuel efficiency features as well as its integrated systems, electric deck cranes and other specifications.

In the Awards’ 10th anniversary year, an additional, special award was presented to celebrate the occasion. Angeliki Frangou won the Deal of the Decade Award for her $600m takeover of Navios in 2005.

Shipbroker of the Year – sponsored by GMS
JOHN C. PACHOULIS

Ship of the Year – sponsored by RightShip
m/v “ARDENNES”

International Personality of the Year – sponsored by the National Bank of Greece
ROBERT D. SOMERVILLE