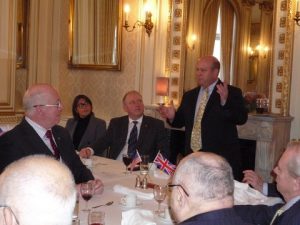 The Naval Club was recently the prestigious venue for a joint networking lunch for over sixty members of the Propeller Club and the TSS.  With the Propeller Club steeped in history, first founded in America, the TSS had a similar start in Hong Kong in the 1970s with both organisations being founded to enable members to network and exchange views and information on maritime affairs.

Ian Millen, President of the Propeller Club of London, extended a warm welcome to Captain Graham Finch, Head of TSS and his members in what was the third occasion that the two clubs had joined forces. The event provided an opportunity to bring both clubs together by way of an excellent lunch accompanied by a guest speaker, Charles “Bud” Darr, Senior Vice President, Technical & Regulatory Affairs for Cruise Lines International Association (CLIA).

Bud Darr, who kindly stepped into the speaking slot at the last moment, brought his extensive industry experience and knowledge to the fore in an interesting post lunch session.

Bud’s role at the CLIA is incredibly wide ranging including being responsible for the cruise industry’s interest in shipboard operations, safety, security, environmental stewardship, emergency response planning, exercises, medical facilities and public health, both US and international. 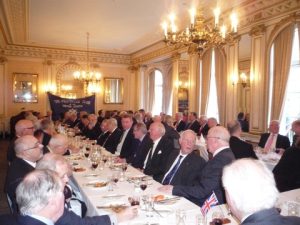 Giving a talk about the cruise industry and his role, Bud’s enthusiasm and dedication for the industry shone through. The CLIA’s role in ensuring “cruise passengers around the world have a safe and secure experience” and being able to “show the public that the cruise industry is one that is responsive and can change, and is willing to change” being at the forefront of his mantra.

Bud shared his experience of the Costa Concordia, experiences like that show why an industry organisation is so important when dealing with events of that magnitude. The cruise industry was very responsive following on from Concordia. Rather than wait for the casualty investigation, the CLIA brought their members together, who between them operate some 300 ships worldwide, to each look at their own safety and operational issues.  Each company worked on their own reports and internal reviews then came together in a confidential forum environment to share ideas of how to improve safety gained from their own review. From that, the Cruise Industry Operational Safety Review was created, the industry itself taking the lead on regulatory issues to show how the industry can work together for the greater good.

“Most trade associations would not touch establishing standards much less make them mandatory to their members. We added this in to the body we already had, in a very short period of time, bringing all of them into the IMO and I’m really proud to say that although these were all good ideas and they took them into IMO guidance as far as the regulators were concerned, even with this laid out in front of them, they have struggled to come up with regulations to address the same sort of things.” said Bud. Even though the review is complete the CLIA’s work has not stopped. The relationships and trust that were formed between fierce competitors by day, over something as important as safety, carries on through a whole range of other industry related topics undergoing constant review.

The CLIA, a consolidation of over 17 worldwide cruise organisations, creates “One Industry. One Voice” – the co-ordination of policy, technical expertise and communications infrastructure at a global level providing consistency to members and the cruise industry.

What will the alternative fuel mix for global shipping be?