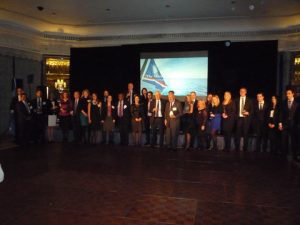 In 1990, when International Registries, Inc. and its affiliates (IRI) began providing administrative and technical support to the Republic of the Marshall Islands (RMI) Maritime and Corporate Registries only 39 vessels and a little over two million gross tons existed in the Registry. Ten years later the RMI Registry was ranked, by what was then, Lloyd’s Register’s World Fleet Stats, as the fourteenth largest in the world with just over 300 vessels and nearly 9.8 million gross tons. By January of 2010, the RMI Registry moved into the position of the world’s third largest registry with more than 52.3 million gross tons and over 2, 100 vessels as reported by The World Fleet Monitor, published by Clarkson Research Services.

“We have aspired, through our decentralized model, to provide the best services to our worldwide clients without compromising the quality of the fleet, ” said Bill Gallagher, President of IRI. “To that end, our intent has not been to be the largest Registry in the world, but instead the choice of flag for quality owners and operators, ” he continued.

In the Registry’s infancy, significant owners like what was at the time, Mobil Shipping and Transportation Company and Hellespont Steamship Corporation, paved the way in putting the RMI Registry on the map as a recognized flag State. By 1995, publicly traded companies like OMI Corporation and Overseas Shipholding Group, Inc., two of the fastest growing shipowning companies in the Registry at the time, brought further recognition to the flag.

After the year 2000 the Registry began diversifying with owners and operators outside of the United States(US) like the Rickmers Group, Oskar Wehr, the Navios Group, OceanBulk Maritime S.A., Frontline Ltd., and the Torvald Klaveness Group. Today, the composition of the fleet ranks owners from Greece as the largest in terms of tonnage followed by the US, Germany, South Korea, Norway, Japan, Qatar, Turkey, Oman and Brazil in that order. Today, the Scorpio Group is one of the fastest growing shipowning companies in the Registry and it is anticipated that the registration of the sister ships STI DUCHESSA and STI OPERA will bring the Registry over the 100 million gross tons mark. “What is interesting to me and what I think has also contributed to the success of the Registry is the truly long-term relationships that have been built with our owners worldwide. Our clients in the US, Greece, Germany and Norway for example have been with us all of these years and as new ships come into their fleets, they bring them into ours. We have been very happy to see the development of tonnage coming out of the Far East and Middle East and hope, like our European and US owners, we will experience this same longevity, ” continued Bill Gallagher.

“While reaching 100 million gross tons is truly a milestone for the Registry we will not rest on our past successes. We will continue to innovate and be proactive in our pursuit of excellence. From the dedicated personnel in the Registry and together with my partners, Tony Guida and Clay Maitland, we thank our owners, operators and other industry stakeholders for their loyalty and support over the years in building a quality Registry, ” he concluded.