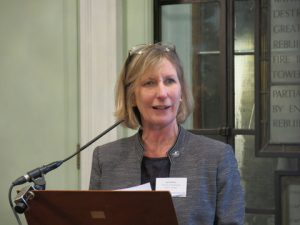 The Sailors’ Society, together with Clyde and Co, hosted a drinks reception this week attracting over 100 attendees. Held at Trinity House, one of London’s most distinguished maritime venues, the event provided a great opportunity to network and find out more about the work of the Society. 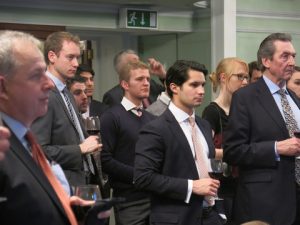 The highlight of the evening was a speech from Jan Webber, Director of Fundraising at the Sailors’ Society, who talked about the work the Society has undertaken, and their focus moving forward. Under the new leadership of Stuart Rivers, the Society will not only help seafarers in port but also do more to assist those abandoned or stranded at sea, and offer more assistance to their families at home. In addition to the valuable work the Society undertakes through its Port Chaplains and Seafarers’ Centres, it is also developing new programmes which include educational projects for seafarers’ children and training for prospective seafarers. 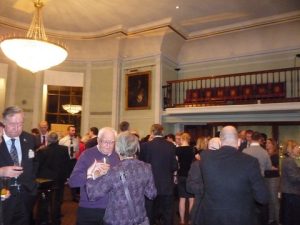 In the wake of Typhoon Haiyan, efforts will also be focused on the Philippines, offering support to the families of the Filipino seafarers who are spread all over the world and unable to return home to their families to offer assistance. Jan praised the rapid response of shipowners to the disaster “As soon as the typhoon hit, shipowners reacted quickly by sending aid within the first week, which was crucial to the relief effort.” 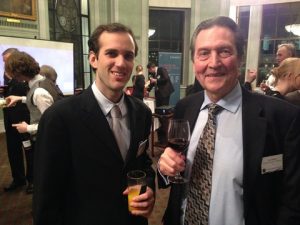 She continued by thanking top corporate donors- Baltic Exchange, Rio Tinto, Howe Robinson, Gulf Oil Marine and the Bahamas Shipowners Association who had helped the Society reach a total of £130, 000 for its Typhoon Haiyan Appeal. In the wake of the disaster, the Society sent a third Chaplain to assist and are now looking to appoint this position permanently in the Phillipines in addition to the two existing roles. 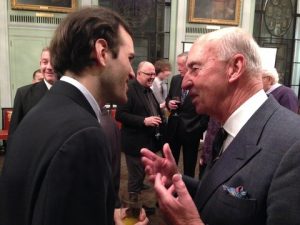 … with Hugh McCoy, former Chairman of Clarkson’s and The Baltic Exchange

Jan spoke of the regular reports the Chaplains sent about the families they had helped. “Frans, Jasper and Nic met many seafarers and their families giving them money and emotional support. Each story was of terrifying experiences – roofs blown away, lost loved ones, businesses destroyed, clinging to wreckage in water, mud and bodies.” The Chaplains also went to the aid of families of those stranded at sea on the Ladybug vessels.

One family’s story was recounted “John, a new marine engineering graduate told us that he was holding the hand of his four month pregnant wife when he lost her hand and she slipped into the water. He dived twice and on the third time could see that his father had found her hand and saved her.” 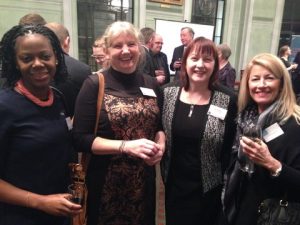 Jan also announced that the newly appointed Director of Media and Advocacy, Scot Bower will be heading to the Philippines to assess the impact of the Society’s work and look at new programmes to support. This includes the rebuilding of schools, churches and village homes.

In addition to the support provided to the Philippines, the Society has a range of projects around the world which it invites companies to sponsor. Many companies are already providing opportunities through dinner envelope collections – including Baltic Irish Night, the UK Chamber of Shipping, IBJ Awards and Lloyd’s List Asia to name but a few. 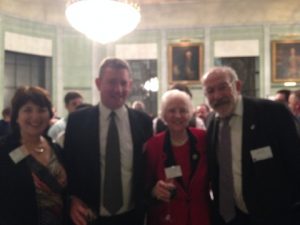 Jan concluded by thanking Clyde & Co and all of the attendees “Our work would not be possible without the corporate supporters from all over the world. Thank you from the Sailors’ Society and the seafarers we help.”

In case you are unaware – next week is The Sailors’ Society ‘Woolly Hat Week’ – an opportunity for offices to lift the gloom of January and have some fun.  Every year Sailors’ Society chaplains distribute over 20, 000 woolly hats, all knitted by volunteers. Often the seafarers who receive these hats are from warmer climates and are not prepared for the harsh winters they encounter. These hats really make a difference to seafarers when at sea. They are also often delighted to receive a gift and know that someone is thinking of them. 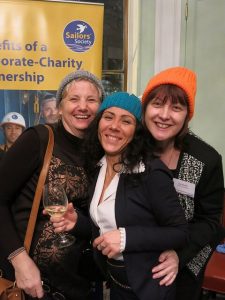 Martine Frost, Eleonora D’Orio and Jean Winfield getting into the woolly hat spirit

Attendees at the Reception were encouraged to take woolly hats kindly donated to the Society and spread the woolly hat word! One gentleman really got into the spirit of the event being spotted at Tower Hill Station sporting one of the Society’s knitted hats on the Jeanius team’s return journey home!

Dutch Navy to buy tugboats in cooperation with FMV Sweden