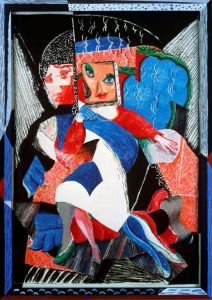 An enduring friendship between two of  Britain’s most important cultural personalities of the past half century is a memorable aspect of an outstanding exhibition that has opened at Dulwich Picture Gallery in London. The two friends are the popular artist David Hockney and the creator of romantic and feminine textile designs, Celia Birtwell.

Ms Birtwell has been described as the face that launched a thousand fashion prints, her business having taken off when she met fellow designer Ossie Clark, but it is prints of a different nature that deck the walls of the Dulwich show, entitled Hockney, Printmaker. 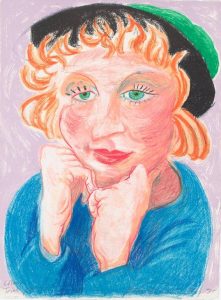 The gallery, which boasts a magnificent collection of Old Master paintings, adjusts its timeline to tune into the oeuvre of Hockney as a contemporary master, by celebrating his long career as a printmaker, a talent that has often been overshadowed by his huge success with dramatic, grandiose oil and acrylic paintings.

Featuring more than 100 works, the show includes eight portraits made by David of Celia between 1973 and 1998. The two brilliant creators had come face to face in 1968 in Portobello Road, and met again through Ossie Clark, a friend of David from Royal College of Art days. 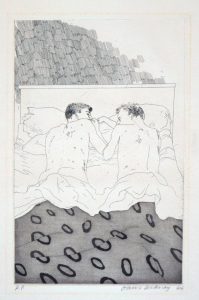 David was a fan of Celia’s designs, and revelled in her company, saying:  “She’s playful, funny. When I first met her, I was attracted to the fact that she could make me laugh, and that’s a very big appeal to me.” He loved portraying the charismatic lady, and she is the subject of 30 of his prints, a quarter of all his print portraits. Knowing her well was a key to his portraiture: he has always shied from drawing to order because it takes time to get to the bottom of a person’s character. He has usually pictured friends: he has rarely painted himself, but did so in an etching in 1998. 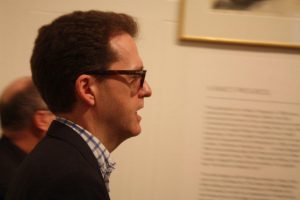 On show are pure figurative portraits, such as Celia with Green Hat, and a wonderful large Cubist interpretation,  Big Celia Print #2, reflecting a need to show the subject from more than one angle. We are told that for the latter work he used long-handled brushes and dilute lithographic inks.

Celia has said: “We have always felt completely comfortable in each other’s company. We amused each other. Whilst he’s drawing me I can see the intensity, struggle and concentration on his face. The intensity is extraordinary.” 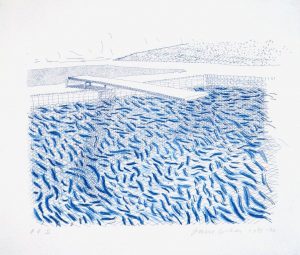 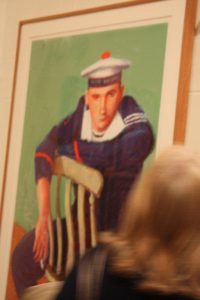 The exhibition traces in its six rooms Hockney’s development and constant experimentation, starting 60 years ago and ending with his recent work with technology up to 2009, and of course, he is still working at breakneck pace.

Curator for the show, Richard Lloyd of Christie’s, is delighted that Dulwich is giving so much space to graphic output of this quality. Galleries tend to give 95% of their attention to painting, he says, and often “if you want to find the prints, they are on the way to the loo.”

Three of the Hockney rooms here are of etching and three of lithography, and these are very different techniques. Few artists have been so relentlessly creative and inventive as Hockney. “In the catalogues of Miró and Chagall there is, if I dare say so, a lot of repetition, but with Hockney you do not see that, ” said Mr Lloyd. The exhibition provides “an insight into an aspect of Hockney’s work which is often overlooked – that he is one of the most prolific, diverse and technically astute printmakers alive.”

David Hockney had met at the Royal College of Art “kindred spirits” who were openly homosexual, and was introduced to the poetry of Constantine P Cavafy, who was born Konstantinos Petrou Kavafis in 1863 in Alexandria and wrote mainly in Greek until his death in 1933. Appreciation of this author led Hockney to a series of prints, entitled Illustrations for Fourteen Poems from C.P. Cavafy, concentrating on those that treated of homosexual love. A new translation was produced by the poets Stephen Spender and Nikos Stangos, and published with the etchings in 1967, a year that was a turning point in the UK when homosexuality was decriminalised. Hockney was not so much a campaigner for gay rights as just wanting the freedom to be his own self. 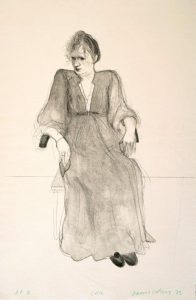 The Cafavy work complements the earlier A Rake’s Progress, 16 etchings from a visit to New York on his 24th birthday. The United States excited him: he settled for some years in California before returning to the UK to live in Bridlington, east Yorkshire.

He was fascinated by the problems of depicting water, and also glass. He came upon a new translation of Fairy Tales from the Brothers Grimm and for further inspiration embarked on a journey down the Rhine, made 80 works, shortlisted them to six and published just three. One of the artistic challenges he set himself was, with the Grimm stories, to illustrate the glass mountain.  He got sheets of glass, smashed them up and piled them up in his studio. That did not suggest a solution, and eventually he illustrated the concept with hard brown in front of the mountain and soft brown beside – using subtle differences of tone to make the point.

Famously, he had learned to etch in 15 minutes, because he ran out of money, and somebody in college said, that on the printmaking side, they give you stuff for free. While studying, he decided to paint on a large scale because that allowed him to occupy the best part of the studio. 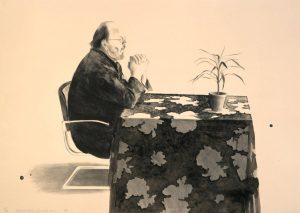 He was an admirer of van Gogh and Picasso –he came to van Gogh quite late, and could not resist making his own version of the Dutch painter’s Chair.

Celia Birtwell is among contributors to a catalogue published by Scala which accompanies the exhibition.

Hockney, Printmaker, is at Dulwich Picture Gallery until May 11 2014. www.dulwichpicturegallery.org.uk