Representatives of ITF-affiliated unions, including the RMT and Unite the Union, will be joined by the ITF’s UK and Ireland inspectorate at 16:00 tomorrow, 18 February, at Portsmouth Commercial Freight Gate, Prospect Road, Portsmouth, PO1.

Condor Ferries, which runs vessels between the UK, Channel Islands and France, is accused by the unions of ‘social dumping’: paying as little as £2.35 per hour to Ukrainian crews that it brought onboard to replace British crews – well below the United Kingdom’s minimum wage. Using the excuse that they are non-domiciled in the European Union those seafarers are also made to work longer hours of duty, while receiving shorter leave.

ITF (International Transport Workers’ Federation) UK and Ireland coordinator Ken Fleming commented: “I’ve travelled these routes and spoken with these crews. There’s no doubt they’re being paid a pittance. This demonstration is in solidarity with their plight and in protest at the behaviour of the company at treating them this way.” 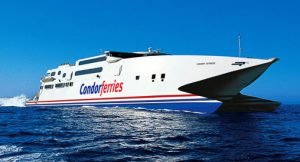 He continued: “The trade union movement wants no part of an operation that allows its operators to pay £2.35 per hour. The whole city of Portsmouth is invited to take a look at what is going on here and express its rejection of this discrimination.”

News from the Hellenic Mediation Association

Fiat Professional scoops trio of awards at What...

All crew should be paid £2 over average min wage of surrounding country’s plus no competitor should be allowed to pay less to their staff .I do not like travel on the backs of slave workers .