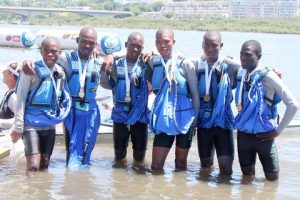 Durban, February 17, 2014 – The South African Maritime Safety Authority (SAMSA) today congratulated the organisation’s eight canoeists who took part in the Dusi Marathon this weekend, with one team bagging silver medals and breaking their own record from being 27th last year to 15th in the placing this year.

Mhlonishwa Hlongwane and Nqobile Makhanya, part of the SAMSA Change a Life Academy entrants, made it in 2:57 minutes on Saturday. They were in the first batch where Sbonelo “Eric” Zondi, also a Change a Life entrant  shared the winning prize with Andy Birkett.

The rest of the SAMSA Change a Life team members, Patrick Canham and Mmeli Ndimande got in at 221 (3:44 minutes).  Sifundo Gumede and Mhlonishwa Gcwensa came in at 190 with a time of 4:13 minutes.  Spamandla Shozi and Nduduzo Shozi came in at 342 (4:33 minutes). The group all come from the Inanda area and this was their first Dusi race that they took part in.

The SAMSA Change a Life Program started with 10 canoeists and today boasts 21 committed canoeists between the ages of 15 and 22 and group of about 12 Guppies (the 8-12 year olds) who are showing promise of becoming well-trained canoeists in the near future. Eight qualified for the Dusi. 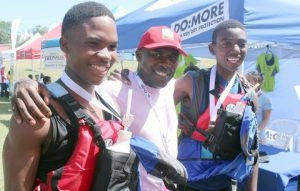 SAMSA Chief Operating Officer Sobantu Tilayi said: “These results are phenomenal. After only four months of training, these youngsters have achieved resounding success.

“It was an epic moment when each of the teams completed the race. Their families were jubilant and proud of them. What we learnt from all this as is that we took school children, refused to allow them to ignore their studies, instilled discipline and allowed them realize their dreams.”

Following the race this weekend, SAMSA will continue with the Change a Life programme under the leadership of seven times Dusi winner Martin Dreyer. As this has been a success in highlighting water sport and water safety, it will consider a more strategic role with the Dusi Marathon organisers itself.

Dreyer was equally pleased and said with his Change a Life team in Nagle Dam, who have been training for years, the youngsters at Inanda Dam shocked him. “They had to attend school, do their chores at home, and walk many kilometres to the dam. But they were committed.

“The SAMSA programme was grassroots. People who never sat in a canoe before or held an oar battled against the odds to have a 100 percent success.”

Dreyer’s next eye is on the guppies to train them for the SA School Championships in April in Pretoria.

“But it does not mean that our Dusi canoeists will be forgotten. They will now train harder, and we will refocus our emphasis on other races. As a seasoned endurance athlete, I can assure you I was shocked that in a short span of four months, we had this resounding success.”

On Saturday, the families of the eight youth, received them at Blue Lagoon to loud jubilation and cheers and cries of delight as mothers and sons embraced each other.