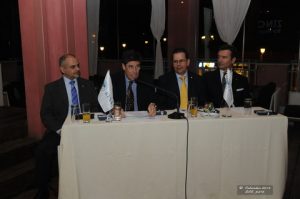 RINA’s first Hellenic Technical Committee meeting for 2014 organized by RINA Hellas on Wednesday the 12th of February at the Floisvos Marina has been very successful with high participation of its Members who are among the most prominent managers of Greek Shipping Companies.

Spyros Zolotas, RINA Area Manager for Greece and Cyprus, during his welcome to the HTC Members and distinguished guests, thanked for the continued support in the past year, which permitted RINA to further grow its classed Greek owned fleet. The growth counts for about 10% in terms of gross tonnage of existing vessels, as well as for several newbuilding orders mainly of container ships and bulk carriers.

The Chairman of the Committee Mr. Akis Tsirigakis, General Manager of Nautilus Marine Acquisition Corp., welcomed the new Members and referred to the fact that the RINA global fleet has further increased with more new vessels joining RINA class in the last year, as well as on the newbuilding orders and first ISO 50001 certificate that has been issued recently for one Member Company.
The RINA General Manager for Greece, Middle East and Africa, Mr. Stefano Bertilone, briefly presented the latest news of the RINA Group regarding its current organization structure in two main companies, RINA Services Spa. in the Testing, Inspection and Certification field and D’Appolonia Spa. in the Engineering Consulting field. He also informed members about the recent acquisition of CSM (Centro Sperimentale Materiali), which is a highly specialized company in the field of studies of advanced materials and will bring to RINA Group a new competency to be offered to its clients worldwide. 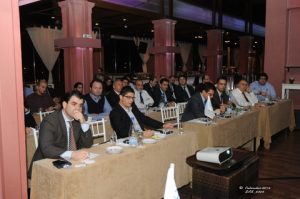 A view of the attendees

RINA is continuing its active role in the chairmanship of IACS and the opportunity was given to Mr. Markogiannis, who is a member of the RINA Chairman’s support team, to update Members on “IACS latest developments and RINA involvement in Harmonized Common Structural Rules development”.

The ever increasing importance of crew training and evaluation was presented by Capt. Nicolo Terrei, General Manager of IMaPhil, under the title “Crucial Issues on Crew training”. IMaPhil is a Company of the RINA Group specialized in the seafarers’ training and career development at the Philippines and is one of the few to have the recognition for TOTS standards.

The last presentation was given by Mr. Paolo Moretti on “Energy Efficiency: A test case”, and it concerned the results of actual installations on board some vessels of the RINA software tool on energy governance named InfoShip EGO. The system is modular and can extend to the requirements of the client according to its needs and the type and operation of each ship. It can provide real time information to the ship’s personnel with a friendly and comprehensive interface on the energy efficiency of the vessel in the current sailing conditions, as well as extensive monitoring and analytical tools for the Company offices on the energy footprint of each vessel and as a result of its whole fleet.

The discussions were continued during dinner and appointment was given for the next HTC meeting expected to be held after summer._

RINA is a multi-national group which delivers verification, certification, conformity assessment, ship classification, environmental enhancement, product testing, site and vendor supervision, training and engineering consultancy across a wide range of industries and services. RINA Group operates through a network of companies covering Marine, Energy, Infrastructures & Real Estate, Transport & Logistics, Food & Agriculture, Environment & Sustainability, Finance & Public Institutions and Business Governance. With a turnover of around 300 million Euros in 2012, over 2, 100 employees, and 140 offices in 49 countries worldwide, RINA is recognized as an authoritative member of key international organizations and an important contributor to the development of new legislative standards. www.rina.org