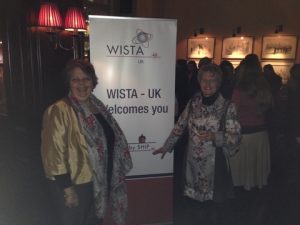 Over 75 WISTA-UK members, associate members  and their guests attended one of the most vibrant Last Wednesday Shipping Drinks networking event at Ball Brothers’ St. Mary Axe premises –  adjacent to the Baltic Exchange, in the heart of the Square Mile! Old memories come to my mind, as the vey place of Ball Brother’s used to be the Baltic Exchange Floor – following the destruction of its building next door by the IRA in 1992, and at times used for major international maritime exhibitions, included that of Maritime London…

Good to see many from over-the-years-faithful WISTA-UK ladies, but most importantly new ones, particularly youngsters and more importantly many members and colleagues – female and male ones from the same company, proving that WISTA-UK has real devotees amongst its Members, Associate Members and guests. 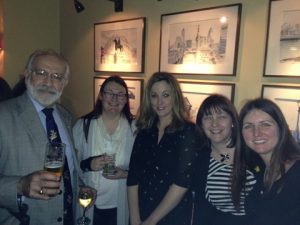 Moreover what makes the difference with other WISTAs is the international background and multi-profession, as well as the level of top of the brass executives from all sectors of the maritime cluster in the United Kingdom.

For over three hours the social networking, an on purpose event to further the inter-relations of this women’s led society, was at its best, preparing the world for WISTA-UK’s 40th anniversary event 1974-2014! Maria Dixon and her ladies in WISTA-UK secretariat promise a unique series of events with the two major ones taking place in London and Liverpool – May and June 2014 respectively. 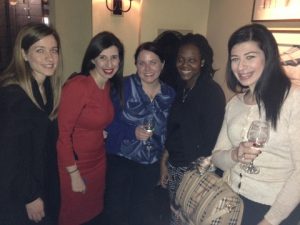 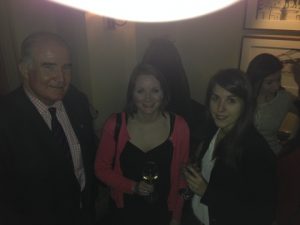 We managed to interview live Maria Dixon and Liz Watton, a solicitor from  E.G Argyrakis & Co., Legal Practice, who is also WISTA-UK Secretary and oversees the Propeller Club’s events too, a very active member; here below is what they said to John Faraclas:

It was www.allaboutshipping.co.uk first participation of a WISTA event this year following our Piraeus Christmas WISTA-Hellas conference  “The Greek State and Greek Shipping – Recovering from the crisis – hand-in-hand?” and more than pleased to meet old friends, amongst them Rear Admiral (IT.CG) Cristiano Aliperta, Maritime  Attaché  and Permanent Representative at the IMO with his daughter Valeria, a five languages interpreter, the three-strong group from our media partners Jeanius Consulting:  Jean Winfield, Amanda Roberts and Marianne Shaw; Afrimari’s and AET’s Temi Benite, Sam Ignarski and his associate Humphrey Hill from Bow Wave and FOB, Bridget Hogan from The Nautical Institute, my former Ealing neighbour Richard Moir – always smiling with the ladies!!!, Dr. Anne-Marie Warris from Ecoreflect, Marine Consultant Subhash Sabhlok, Artemis Traulou from FP Marine Risks as well as her colleagues Daniel Wells and Ewa Sliwinska – another trio proving how important WISTA is for all. Met also Franky George from DGS Management Services, Patrycja Zadworna from Pequod Associates, Helen Hunter Davis from MFB Solicitors, another strong trio from St. Kitts & Nevis International Ship Registry Jasvinder Virdi, Tracy Hughes and another of their colleagues – what’s her name… opppsss, Infospectrums Angela Velasco and  Eleonora D’Orio, ah! we met – yes we where also a duo with Anny Zade – Helene Sironneau from Winter Scott Solicitors and then we were approached by two greek sisters Nadia and Gina Balta, faithful followers of the site, what a nice surprise! A always Maria Dixon’s husband Paul Dixon was there as well as other members of her ism company.