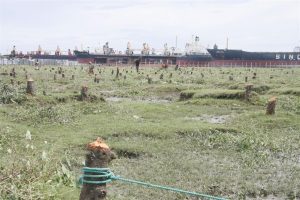 Brussels,  27 February 2014 – The NGO Shipbreaking Platform and its 18 member organisations around the world applaud the Forest Department and the District Administration for removing two shipbreaking yards that had been operating illegally on protected forest land for several years in Chittagong, one of the worlds’ biggest toxic ship graveyards located in Southeast Bangladesh [1]. SK Steel and SK Ship Breaking and Recycling were able to lease the land illegally in 2009, chopped down thousands of mangrove trees and started importing end-of-life ships for breaking on the beach. On 6 October 2013, the Supreme Court of Bangladesh declared the yards illegal, ordered them to be evicted and the trees to be replanted.

“Finally the Government is facing up to its responsibilities and enforces our environmental law and the Court’s decisions, ” says Syeda Rizwana Hasan, Chief Executive of Platform member organisation BELA (Bangladesh Environmental Lawyers Association). “Shipbreakers break the law every day by importing ships containing hazardous waste into Bangladesh and having them beached, and we need to stop all illegal operations.”

In July 2009, more than 14000 mangrove trees that had been planted with the support of the United Nations in order to protect the local communities against the devastating impact of cyclones and floods were felled down to make way for new shipbreaking yards. Amongst the operators of the yards was a Bangladeshi Parliamentarian, who also ordered to illegally cut thousands of trees. Some of the tree-cutting took place during night time, and local communities only found out about it when it was too late.

In response to the tree-cutting, the Department of Forest, an agency of the Ministry of Environment and Forest that protects and manages the forests of Bangladesh, filed a case against the illegal shipbreaking yards in 2009. Already in 2010, the High Court stated that shipbreaking should not take place on the beach and on forest land. Moreover, it declared four shipbreaking yards illegal that had been set up after cutting down the mangroves, and asked for afforestation. But shipbreaking continued in the yards and the trees were not replanted. The Supreme Court decision of October 2013 supported the initial plea of the Forest Department, who has now taken action together with the District Administration and has evicted the illegal companies. Thousands of saplings have reappeared where ships were broken until recently.

Bangladesh is regularly struck by cyclones and floods that inundate villages and leave thousands of families without a home or a livelihood. The presence of trees along the coastal belt, including mangroves, helps to prevent erosion and to mitigate flooding. Environmental plundering and illegal land grabbing by shipbreaking yards destroy the coastal green belt and local villages are left vulnerable to cyclones, coastal and river erosion as well as floods.

The NGO Shipbreaking Platform has followed the illegal tree-cutting case since the beginning [2].

“Today, Bangladesh sends a clear signal to the global maritime industry and those involved in shipbreaking: we do not want your ships polluting our environment and endangering the lives of our communities, ” says Patrizia Heidegger, Executive Director of the NGO Shipbreaking Platform.

[2] See the 2010 report about the Platform’s visit to the Chittagong shipbreaking yards here:http://www.shipbreakingplatform.org/platform-team-goes-to-shipbreaking-yards-of-bangladesh/

Collapse of time in Chios…