It hits you in the eyes like a blast from a naval cannon. A full-scale installation harking back to the Battle of Trafalgar and entitled Cannonball Heaven confronted visitors as soon as they stepped through the entrance to the Art14 London show at Olympia. The striking work by the British-Nigerian artist Yinka Shonibare MBE expounds on his themes of power structures and conflict.

Cannonball Heaven,  placed right inside the doors of the art fair by Pearl Lam Galleries, features a replica of one of the cannons used in the 1805 battle between the Royal Navy and a combined French and Spanish fleet. Yinka’s brightly-coloured assemblage was inspired by the research he did for his Trafalgar Square Fourth Plinth 2010 commission Nelson’s Ship in a Bottle, a 1:30 scale model of HMS Victory.

The model of Horatio Nelson’s flagship was on display in the historic square for more than a year before being transferred to the National Maritime Museum in Greenwich, . 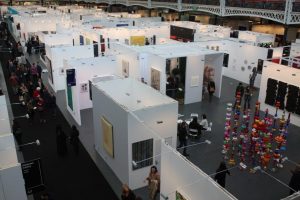 Art14 view with Pearl Lam Galleries on the right

The artist became fascinated by the heavy artillery of the British fleet when he visited HMS Victory, which is berthed in the Historic Dockyard at Portsmouth and has a dual role as the flagship of the First Sea Lord and a museum of the Georgian Navy.

Firing the cannon, which rests on a blood-red mount, in Yinka’s installation are two figures in ornate uniforms parodying those of naval officers from the early 19th century. The concept is that as a projection of status, clothing performs a critical role in establishing and perpetuating class systems, even more clearly in a hierarchical structure such as the armed forces. The cannonballs themselves are coated in colourful fabric complementing the costume of the two naval figures.

Yinka’s work was shown in association with Stephen Friedman Gallery, London, with which Pearl Lam collaborates.

A Royal Academician, Yinka Shonibare MBE lives and works in the East End of London. He was born in the capital and brought up in the Nigerian city of Lagos. He returned to London to study Fine Art at Byam Shaw College of Art (now Central Saint Martins College of Art and Design) and then at Goldsmiths, where he received his Master of Fine Arts, graduating as part of the Young British Artists generation. 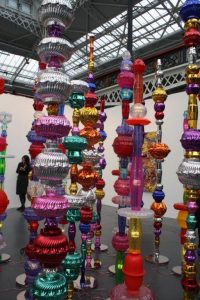 Making liberal use of African-style fabrics, he examines Western art history and literature from a global perspective. After he was awarded the MBE, he added the title to his professional name.

His latest solo exhibition,  Making Eden, is at Blain|Southern Gallery, Berlin, until April 19 2014, where he seeks “to demonstrate the destructive patterns of human behaviour that repeat themselves across time.”

Cannonball Heaven was presented in London alongside works including Yinka’s The Dreaming Rich Paintingcreated for his first solo at Pearl Lam Galleries in Hong Kong. This gallery group has an importance presence in Hong Kong, Shanghai and Singapore. Hong Kong-born Ms Lam, daughter of a wealthy property developer,  has been exhibiting Chinese and other contemporary art and international design for more than 20 years.

Ms Lam, an early promoter of such art in China, said: “Exhibiting at Art14 extends the reach of Pearl Lam Galleries as we continue to look for new markets for our artists’ work and take them to new and broader audiences.”

Her Galleries at Art14 presented their first collaboration with South Korean artist and designer Choi Jeong Hwa. This was in the form of a multi-pillared, site-specific light installation named Alchemy which was eye-catching enough by day and looked even more dramatic when darkness fell. Its plugged-in materials were described as “found LED lights, plastic bowls and steel.” The artist rummages through street markets and 99cent stores in his homeland for trifles. His most famous pieces include a 10-story installation made from 1, 000 discarded doors, and the adornment of the the Olympic Stadium in Seoul with garlands made from 2m items of trash. He works around the idea of the conflict between artificiality and permanence.

Rite of Spring I. Mixed media, household paint with precious metals and trash. By Michael Chow. Shown by Pearl Lam Galleries at Art14.

Among others creating a stir was Michael Chow, the founder of the Mr Chow chain of Chinese restaurants. In his first exhibition in London for nearly 50 years, he showed a series of large-scale mixed media canvases, using precious and household materials ranging from paper money, gold leaf, liquefied silver, trash, and egg yolk to rubber gloves.

Born Zhou Yinghua, Mr Chow took to art as solace for the alienation he felt on being sent to London at the age of 13. To make a living, he opened his first restaurant in Knightsbridge in 1968. Mr Chow has a solo exhibition, Recipe for a Painter, at Pearl Lam Galleries in Hong Kong.

More information is available at www.pearllam.com