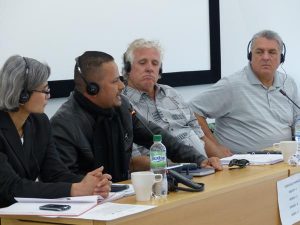 ITF affiliates are being called on to organise action at Honduran embassies in their countries in coming days to highlight concern over the ongoing intimidation and victimisation of dockers’ union members at Puerto Cortės.

A demonstration is planned at the London embassy on Thursday (20 March). An ITF delegation including acting general secretary Steve Cotton and president and chair of the dockers’ section Paddy Crumlin, will meet with the Honduran Ambassador to the UK to discuss the appalling treatment of Sindicato Gremial de Trabajadores del Muelle (SGTM) members.

In a letter to be handed over during the meeting, Cotton says: “There have been a myriad of human rights abuses and threats to the life and liberty of union members (in Puerto Cortės) because of their legitimate requests to their employer for negotiation over a collective bargaining agreement at the port.”

To date the leader of the SGTM Victor Crespo, who will also meet with the Ambassador, has been forced to flee Honduras after attempts on his life; his father was then killed under suspicious circumstances. The SGTM treasurer was dismissed for no valid reason and union members were arrested and charged with terrorism after peaceful protests in the port in February. Most recently Honduran police visited SGTM headquarters looking for members who participated in a legal and peaceful protest organised by the ILWU at an ICTSI operated terminal in Portland, USA.

The letter continues: “We feel it is imperative that this matter is brought to the attention of your nation’s government. Steps must be taken to bring a swift end to this long running anti union campaign in Honduras. Securing this action has become a priority for trade unionists around the world who will be contacting and visiting Honduran embassies in their own countries over the coming days to express support for their colleagues.”