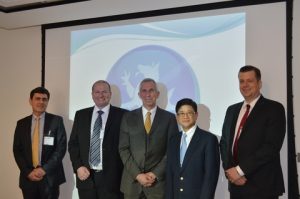 Records captured in the specialist CINS (Cargo Incident Notification System) database have increased by about 65% during 2013, according to a report released by the CINS Organisation.

“The analysis of these incidents makes interesting reading, particularly against the back-drop of a number of major ship casualties during the year” says Uffe Ernst-Frederiksen, Head of Cargo Management at Maersk Line, and CINS chairman.

The CINS initiative, created in late 2010 by five of the top 20 liner operators, seeks to capture structured data from incidents and problems that regularly disrupt operations in order to better protect lives, property or the environment. During 2013, ten liner operators have been populating the database – hosted by the COA (Container Owners’ Association) – and a number of others have been monitoring the findings or expressed interest in joining. Participants in CINS account for about 60% of container slot capacity (source: Alphaliner).
CINS facilitates the capture by liner operators of structured key causal information relating to cargo and container incidents. The information captured explicitly excludes any shipper data in order to preclude any anti-trust concerns; the CINS Organisation is committed to compliance with the US Sherman Act, Article 101 and 102 of EU treaty and any other similar competition law.

The records include the nature of the cargo concerned and its packaging, together with details of the routing. In addition, there is information on the type of incident and the root cause, together with a simple severity rating. The TT Club, as a key insurer for the transport industry and an advisory member of CINS, undertook analysis of the data on behalf of CINS.

Accident Prevention
Uffe Ernst-Frederiksen took over as CINS chairman in November 2013. “The aspiration of CINS was to provide early warning of worrying trends, and the last year has provided ample justification of this” he reports.
The emphasis on safety and accident prevention is demonstrated by the fact that ‘high’ severity incidents have nearly halved, while ‘medium’ and ‘low’ incidents have increased by more than 80%. Thus, while in absolute terms there was an increase in the number of cargo fires being reported, almost half the records cited mis-declaration of cargo, representing an increase of almost fivefold from the previous year. The CINS participants see this as consistent with the publicised issues around Material Safety Data Sheets and the findings of inspections by Maritime Administrations as reported to IMO each year. This has shown that consistently over the last decade about a third of units with deficiencies relate to placarding and marking.
“The heart of this initiative is a quest for quality” Ernst-Frederiksen continues. “Both in terms of pure service delivery, ensuring the cargo arrives in sound condition on time, and also improving the way in which all parties in the supply chain carry out their obligations and communicate.”

Seasonal and geographic trends
Following on from the findings in relation to mis-declaration, poor or incorrect packing remain persistent issues, again underlining the importance of the development of the IMO/ILO/UNECE CTU Code, which should be approved by all three UN agencies during 2014. Again, the IMO casualty and incident reports have shown a clear and disturbing trend-line in relation to cargo packing and securing deficiencies.
“As the database begins to mature, it is interesting to start trying to identify seasonal or geographic trends” explains Peregrine Storrs-Fox, the TT Club’s Risk Management Director. “For example, during the mid months (June, July and August) of 2013, there was a clear increase in the number of incidents recorded.”
Perhaps unsurprisingly, almost two thirds of the year’s fires occurred during this period, which correlates to seasonal and trade route factors. However, there was also a marked increase in mis-declared cargoes as well as leakages, which might suggest an impact from the use of casual labour during these months. Time will tell whether such pattern changes are sustained in future years. 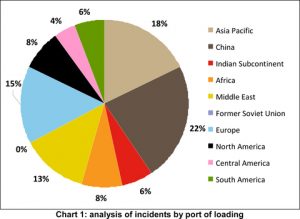 Analysis of incidents by port of loading
One of the sobering factors appearing in earlier analyses was the finding that a third of the incidents arose from cargoes loaded in Europe and North America. This latest dataset – covering all of 2013 – indicates a degree of ‘normalisation’ of findings compared with expectation. Shipments from Europe and North America that caused problems has dropped back to 23%, while the proportion emanating from China has increased more in line with anecdotal expectation.
Storrs-Fox states, “The significance of this may need to be validated in future analyses, but could greatly assist the lines – and other safety and training organisations – in targeting resources to improve the quality of controls for packing and dispatching cargo entering the supply chain.”

Analysis by incident type
As with earlier analyses, it might be expected that in 75% of incidents (up from 2/3) the ‘presenting problem’ involved dangerous goods substances during 2013. Given the fivefold increase in findings of mis-declaration, coupled with an increase in the absolute number of fires and only marginal reduction in leakages, the overall picture is hardly reassuring for any stakeholder in the industry.
In pursuit of the CINS aspiration to identify what can be done to improve safety through the supply chain, participating lines have undertaken to strengthen the root cause analysis capability in the database. In particular, the organisation has recognised that the output would better support safety and training if secondary definitions can be captured.

“While leakage is a persistent problem, the nature of the container or packaging involved would improve the veracity of the data, for example” Ernst-Frederiksen explains. “Similarly, mis-declaration could usefully distinguish between issues relating to weight, or inappropriate classification or non-declaration of dangerous goods, also helping to identify where the root lies in misunderstanding and error, rather than deception.”
During recent years, the liner shipping industry has suffered considerably with major casualties; some of these will lead to formal investigation findings, although forensics can be limited by the extent of damage incurred. What CINS is increasingly able to prove is the ‘near miss’ risk, any of which has the potential to result in loss of life or disaster and environment damage.

“Increased awareness”
The CINS Organisation is proud to have built successfully during its second operational year.
Ernst-Frederiksen gave credit to Reinhard Schwede, formerly of Hapag-Lloyd, who had steered development as chairman during 2013, as well as the first chairman, Dirk Vande Velde of MSC, who continues to be actively involved in the project as one of the founding participants.
“The findings to date demonstrate the potential to increase the awareness of areas of concern and trends in containerised shipping, and continue to improve safety in the supply chain” he concludes. “The aims of the CINS Board include achieving broader liner industry engagement and greater profile in international maritime affairs.”