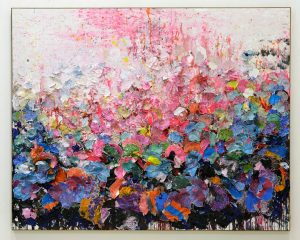 With a series of glorious collages of resplendent rice-paper flowers, Chinese artist Zhuang Hong Yi has embarked on his first solo show in the UK.

Based in Amsterdam and Beijing, he makes his debut in London after successful exhibitions in the Netherlands, Italy, Belgium, Spain, Switzerland, Germany and the US.

The new show is at the Hua Gallery, a 2, 000 sq ft glass-fronted block designed by Foster & Partners south of Battersea Bridge, at a Thames-side precinct named Albion Riverside. Hua Gallery, which has swiftly become a leading showcase for contemporary Chinese art, has put on the exhibition in collaboration with Aria Art Gallery, another go-ahead institution which has its home in the historic heart of Florence, close to Ponte Vecchio, the venerable bridge over the Arno lined by pricey jewellery shops.

Under the title Blossom: The Art of Zhuang Hong Yi  is presented a succession of pieces superimposing an ancient form – rice paper goes back 2, 000 years in China – on canvases of various scales. The largest work is 200cm by 250cm, and bursts with joyful colour.  The work is said to be “triggered by a fusion of ying and yang.”

Curated by Antonio Budetta & Federica Cirri, the show is displayed to advantage at Hua to allow the beauty and elegance of the work to shine, as a riot of colour and form paradoxically produces a sense of calm and harmony.

Zhuang Hong Yi was educated at Sichuan Fine Art Institute, southwest China, and in 1992, moved to study at Groningen and then teach at The Hague, before settling on the outskirts of Amsterdam with his artist wife Luluo.

A note about the artist says: “He took this path after completing his studies in post-Mao China where strong signs of change could be felt, but society continued to be torn between hope and fear, between tradition and modernity, where artistic training could not deviate much from the traditional rules of the academy.”

What he sought in Europe “was not a new ideology but rather the freedom to produce works according to his pure expressive energy.”

He retains a studio in Beijing, where he refreshes his ancestral Chinese sentiment twice a year, and his output there where the petals are gently sculpted from porcelain, is packed with the utmost care, for dispatch by sea to Amsterdam.

In several compositions there are easily 1, 000 delicate floral forms fashioned from hand-cut rice paper, painted individually with ink, and layered with acrylic after being attached to the canvas. With the magnitude of the labour, it is unsurprising that the artist employs assistants. The work is rightly described as “almost sculptural.”

The flowers are an allegory for the beauty and joy of life, and its fragility and impermanence. In Chinese culture, flowers carry many metaphors and emotions, says Zhuang Hongyi. They sometimes share space on his canvases, which have a remarkably tactile quality, with bold colour that alludes to something mysteriously non-floral. This spurs a temptation for the viewer to impose his or her interpretations; a wealth of swirling, sparkling blue for instance is highly suggestive of a capricious sea beating against a cove.

Blossom: The Art of Zhuang Hong Yi is at Hua Gallery, Albion Riverside London SW11 until May 30 2014. More information at . www.hua-gallery.com