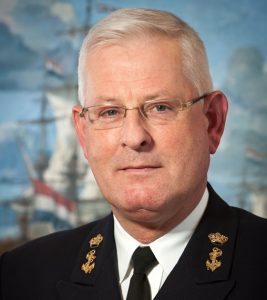 Successful international relations depend heavily on collaboration, and this spirit of collaboration is clearly demonstrated by the close relationship between navies. The collaboration between the Royal Netherlands Navy and the UK’s Royal Navy is further demonstrated by the organisation of the 12th International Naval Engineering Conference and Exhibition 2014 (INEC 2014) which is being held in the Netherlands at the Marine Establishment Amsterdam next month (20-22 May), with the significant support of both organisations.

“This will be the third time that INEC has been held in the Netherlands, and for many years there has been strong co-operation and teamwork between the two countries in planning this highly successful series of conferences, ” explains Commodore John Newell MBE RN, Ministry of Defence and the INEC 2014 Conference Chairman.

“With the theme ‘Innovative solutions to global trends’ we will be looking at the challenge before us to design innovative engineering solutions to requirements that give us sufficient flexibility to respond to the most likely plausible scenarios in seagoing operations. Already specialists from over 13 nations have registered to attend.

“This year we are honoured to have Vice Admiral Matthieu J M Borsboom, Commander of the Royal Netherlands Navy as one of our keynote speakers (the other being Vice Admiral Simon Lister CB OBE, Chief of Materiel (Fleet), Ministry of Defence, UK); and the wholehearted support of both Rear Admiral (Ret) Ruurd Lutje Schipholt KNL, OON, HonFIMarEST and Rear Admiral Dr Arie Jan de Waard who are Patrons of INEC.

“The fact that we are able to hold INEC 2014 at the Marine Establishment Amsterdam, and that HNLMS Tromp, an Air-defence and Command Frigate (LCF), will be playing a key role in the event, is further evidence of the close and rewarding working relationship between the two navies.”

“We are only too pleased to make our facilities and vessel available for this important event; and I am greatly looking forward to my own involvement, ” says Admiral de Waard. “International collaboration is vital, and I eagerly anticipate important discussions taking place on technical innovation during INEC and on board HNLMS Tromp proving the worth of bringing likeminded people from all over the world together to discuss solutions. The fact that this year there are more contenders than ever for the Sir Donald Gosling Award is extremely gratifying; encouraging young engineers and technologists is both highly rewarding and of great significance to us all.”

Co-operation beyond navies
“In the lead up to, and at INEC, co-operation spreads beyond the navies of the two countries to very welcome international collaboration between maritime organisations. INEC’s supporting organisations include KIVI (The Royal Dutch Society of Engineers) together with industry representation from NIDV (The Netherlands Defence Manufacturers Association) and UK NEST (UK Naval Engineering Science and Technology), as well as the Society of Naval Architects and Marine Engineers, the Society for Underwater Technology and a long standing supporter of our Learned Society events, the Office of Naval Research Global, ” explains David Loosley, Chief Executive of the Institute of Marine Engineering, Science and Technology (IMarEST), organisers of INEC.

“Working in partnership we bring like-minded professionals together who benefit greatly from their three days at a Learned Society event such as INEC as well as continuing to support the aspirations of professional membership organisations.”

Highly relevant conference
The full conference programme for INEC 2014 is online at www.imarest.org/inec

A series of plenary presentations follow the two keynote addresses on the opening morning – ‘Change in RNLN technical domain’; ‘Technology transfer and industrial participation in the context of cross-border naval platform trade’; ‘Unmanned naval aviation and its impact on future carrier design’; and ‘Supporting the Royal Navy – The Surface Ship Support Alliance’.

Thereafter by means of parallel sessions featuring over 75 peer-reviewed technical papers speakers from INEC 2014 will focus on Green Ship; IPMS; Ship Design; Ship Systems; Submarines; Waste Heat Recovery; Materials; Human Factors; UXV; Simulation; Signatures; Gas Turbines; Electrical Systems; and Maintenance before all delegates are brought together on the Thursday afternoon for the closing plenary session. This will address ‘Shipboard electric plant architecture design: A historical perspective with vision toward the future’; ‘Type 45 Destroyer full electric propulsion – Lead act or a step too far?’; Analysing potential military utility of landing craft by ship-to-shore manoeuvre modelling’ and feature the presentation of the Sir Donald Gosling Award for authors aged 35 or under.

Networking
Networking plays a key role at IMarEST Events, and INEC features a Welcome Reception, held in the exhibition, and Dinner at the end of the first day at the Marine Establishment Amsterdam. The Conference Reception for INEC 2014 will be hosted by the Royal Netherlands Navy aboard HNLMS Tromp at the end of the second day of the conference, providing all participants with a unique opportunity to visit this innovative class of ship and to learn more about the role of the Royal Netherlands Navy worldwide.

HNLMS Tromp is one of four De Zeven Provinciën-class Air-defence and Command Frigates (LCF) built by Damen Schelde Naval Shipbuilding. The Frigates perform two important roles: A command role in facilitating the operations of the deployable and operational staff, and providing anti air warfare (AAW) protection for an entire fleet. The most striking characteristics are the ships’ stealth technology and high degree of automation of the ships’ systems which means that they can be operated by a ship’s company of just over 200.

Industrial visit
An unprecedented opportunity is offered on Friday 23 May by the Royal Netherlands Navy for INEC delegates to join the crew of HNLMS Tromp to make a short journey from Amsterdam (subject to operational demands of the ship).