An emissary of turbulent times…

“A god made these gestures, ” says the translated voice of an African woman of her traditional weaving skills, pictured well over half a century ago.  This is one of many mesmerising frames in the 1953 documentary film Statues Also Die made by Chris Marker and Alain Resnais. Statues, masks and other emblems of African culture ‘die’ when they are labelled and put in a glass case in a museum.

Chris Marker is the lesser known of the two film directors, but it might be said of him that “a god made his gestures” which took the form of more than 60 films, countless photographs, writings and, in the years just before his death in 2012, posts on YouTube.

“I traded film for video, and video for the computer, ” he said.

The full 30 minutes of Statues Also Die is screened as part of the first UK retrospective of Marker (his birth name was Christian François Bouche-Villeneuve but he changed it while working in the US) which has opened at London’s Whitechapel Gallery. The 35mm black-and-white production is one of the most powerful anti-colonialism movies ever made. The film’s plain-spoken messages are that religious requirements are replaced by market demands, tools and techniques become bazaar art, and that sacred objects become curios.  As a white colonialist is seen being ferried ceremoniously over a river, the commentator declares: “We are Martians in Africa.” At sporting events, black boxers and basket-ball players beat whites – and then white policemen use sticks and worse to beat black protesters on the streets. 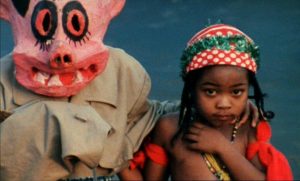 Prize-winning Statues Also Die went further than just questioning the Western model of art, and was banned because of its excoriation of French colonialism. The same censorship fate befell one of Marker’s later films, the pro-Castro  ¡Cuba Sí! The full version of Statues Also Die had to wait until the revolutionary year of 1968 before it could be shown in public.

Marker’s best known work La Jetée (The Pier) supposes a Parisian struggling in the aftermath of nuclear war to make sense of a remembered scene including the face of a woman at an airport, and who is the subject of an experiment by the new masters of the world to send emissaries into Time. In a frightening bunker atmosphere, “the camp police spied even on dreams.” Marker’s love of foreign countries was another form of time travel, the exhibition suggests. In the 1950s, he edited Petite Planète, a series of books about the countries which inspired his first photo essays. La Jetée is said to have influenced Terry Gilliam’s 12 Monkeys,  James Cameron’s Terminator,  and more.

It is unusual for an art gallery to dedicate so much space to projected films, but in this way we are immersed into Marker’s no-holds-barred critique of modern society.

Le Joli Mai (The Merry Month of May, 1963) refers to the end of the Algerian war of independence in, using the springtime gaiety of Paris as a sarcastic contrast to the reactionary forces threatening French democracy at the time.

One of his last works was Ouvroir: the Movie, a guided tour of the virtual museum he created on the website Second Life for his online avatar, a cat called Guillame-en-Eqypte. In Sans Soleil he narrates letters from an anonymous woman to a cameraman, with shots from the contrasting worlds of Japan and Guinea-Bissau.

In the UK premiere of the multi-media installation Zapping Zone (Proposal for an Imaginary Television, from 1990-94), one of the TV sets shows the legend “Ceci n’est pas la télévision.” This brings to mind the recollection by a friend of Marker that his Paris apartment had several televisions switched on at a time, one receiving satellite broadcasts from Russia.

Chronicling anti-war movements from the Vietnam War of the 1960s to the Iraq War in 2003 was a big part of his oeuvre, and the final work is Le fond de l’air est rouge of 1977, which was re-edited and released as A Grin without a Cat in 1993. This is about the perceived failure of idealistic social movements and revolutions in the 1960s.

Born in 1921, Marker began his anti-fascist struggle as a member of the Resistance and never ceased resisting oppression. In his political activism, he was especially close to Latin American issues: Chile, Brazil and Cuba among them. He had a big following, but global attention was more focused on the new wave of directors including Jean-Luc Godard. He put objective film first: he rarely gave interviews and refused to be photographed.