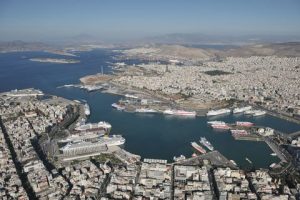 Wednesday, 30 April 2014 00:00 – As from 1 January, Greece is holding the Presidency of the Council of the European Union. It is no secret that Greece is a real maritime country, and not only because of its shipowners. Greece’s largest seaport, Piraeus, is a top 10 container and cruise port in Europe. Time to take you for a visit!

Can you present the port of Piraeus? What are its main characteristics?

The Port of Piraeus is a port of large sizes. It is the largest passenger port and one of the largest commercial ports in Europe. It has 44 km seawalls, and it serves annually 40.000 ship arrivals and departures, 15 million ferry passengers, 3.000.000 vehicles, 500.000 vehicles/goods (car-terminal), more than 3 million containers and more than 2.3 million cruise passengers.

The Piraeus Port Authority (PPA) was profitable for a fourth consecutive year. How do you explain this positive result in a period of crisis?

Since late 2009, The Piraeus Port Authority (PPA) has updated its strategy as a result of new developments in the operations of the container sector. The concession agreement for the operation of Pier II, together with the eastern part of Pier III, which is under construction, and the opening of Pier I by PPA in 2010, coupled with the worsening economic crisis had a significant impact on the financial and administrative operations of the Port Authority. Until 2009, when the abovementioned concession agreement was implemented, PPA was in terms of revenue almost entirely dependent from container handling activities. In addition, the limited capacity of Pier I, the new competitive framework with two providers and the transfer of organisational, operational and human resources to the smaller Pier I, have raised the urgent need for PPA to identify additional sources of revenue and greater diversification of income in order to maintain the profitability in the short and long term.

With this starting point in mind, PPA created a new strategic plan with two main long-term objectives: first, to gradually reduce the almost exclusive economic dependency of the Authority from the container segment and, second, the active development of the remaining and new operating segments of PPA, while avoiding to be dependent from one single user / customer.

In 2012, there was a downturn in ferry passengers passing through EU ports, also in Piraeus. Do you sense a recovery for the coming year?

For Piraeus, 2013 was a good year in terms of passenger transport, due to both the very good geographical location of the port, and PPA’s actions to enhance the cruise sector activities with new investments and upgraded services. In 2013, Piraeus recorded a 2, 296, 457 cruise passenger traffic corresponding to 11.1 % increase compared to 2012.

Concerning the ferry connections from the central Port of Piraeus, the passenger traffic to and from the Greek islands reached 7, 642, 762 passengers in 2013, recording a marginal decrease of 1.13 % compared to the previous year. We also serve the ferry connection with Salamis Island, which reached 7, 730, 555 passengers in 2013. We believe that 2014 will be one more very good year.

The port of Piraeus is a very polyvalent port, combining different functions and responsibilities, both public and private. How would you define the role of the Port Authority?  How important is the Port Authority for guaranteeing the further growth of the port and the local and regional economy that relies on it?

The port of Piraeus is a port of multiple activities: It is active in 7 port activities: (a) Coastal shipping, (b) Cruise transport, (c) Car-terminal, (d) Ro-Ro services, (e) Containers transport, (f) Ship repairing and (g) environmental and logistics operations.

PPA is both an enterprise and an authority through or in conjunction with other public bodies exercising  the role of “public authority” (free zones, customs, port, health, fire, portals of entry – exit the country, security, environmental and towing, shipwrecks, etc.).

As was pointed out by Commissioner Siim Kallas, to the ESPO General Assembly in Varna last year: “Ports are engines for growth”. PPA SA is the growth engine not only for the Greek economy and the Greek port system, but also for the entire maritime industry in Europe, in the Mediterranean and in Greece.

Piraeus Port Authority has been since a long time a loyal supporter of EcoPorts. Since 2004, when the port was first certified by PERS (the Port Environmental Review System). Piraeus has been continuously demonstrating its environmental management credentials. At the end of March, it was re-certified with PERS for the 4th consecutive time. What does it mean for Piraeus? Why is sustainability so high on Piraeus’ agenda?

In this framework, it has applied a certified system of environmental management according to the European Port Environmental Review System (PERS). Furthermore, PPA has worked out and applied an environmental regulation for its operations, for incidents regarding marine pollution, for the waste management of vessels, as well as for the operational waste of installations. At the same time, programmes for monitoring environmental parameters are being materialised for the evaluation of the quality of the sea, the noise and the atmospheric environment.

You know that ESPO has been investing a lot of efforts over the last years in finding ways to optimise the integration of the ports into the city and local community? Is this also a challenge for the port of Piraeus?

In Europe, but also in Greece, ports are sea edges of cities. Most cities have been able to develop thanks to the shipping and ports industry. But, today, the enlargement of cities to urban centres and ports to network hubs has created new facts, which can only be resolved through consensus. Cities and ports are different legal and economic entities, and they must operate in a coordinated way and consensually in order to serve the national economy, the local and regional societies, and always within the rules of a single European ports policy. Cities, users and the port should cooperate through modern corporate bodies under the monitoring of an Independent Regulatory Authority.

Recently a call for interest has been published by the Hellenic Republic Asset Development Fund aiming at the sale of the 67% of the shares of the Piraeus Port authority. Could you explain us the further steps in this privatisation process? What are the challenges?

Privatisation is used as one of the ways to repay creditors for the public debt. But I bearing in mind Commissioner Kallas’ words “ports are growth engines” privatisations in the port sector industry should take into account:

• The European acquis and EU regulations

• The conditions of the Athens Stock Exchange

• The legal complications that emerge due to the “Port Authority”,

Theoretically, there are two privatisation options:

• The solution of the sale of all shares of the port company to a private investor.

• The solution of concessions of infrastructure or activities.

In terms of shareholding structure, 90% of the ports in the European Union are of public character with shareholders within the public sector, the government, regions, chambers, users. In these public ports, the operation, activities or land space are allocated through long-term concessions by the managing body to private companies. The solution of full privatisation has been implemented slightly without much success.

The assumption that in ports the shape of a (state or private) monopoly should be excluded, is globally accepted.

In any case, the privatisation options, which can be promoted due to the economic crisis and the country’s commitments, should combine three conditions: 1) To contribute directly revenue for repaying the debt, 2) To support the growth prospects and 3) To be compatible with national and Community law.

What are the big challenges ahead for the Port of Piraeus? Can “Brussels” and the European policy contribute in addressing these challenges?

As you mentioned before there is an open international tender for the sale of the 67% of the shares of Piraeus Port Authority. No matter what the final outcome will be, the port itself has some great perspectives ahead.

As regards the expansion of the infrastructure, there is the investment project of the southern expansion of the port. This includes the construction of quay walls and berths for the accommodation of new generation cruise vessels. For the first phase of the project (€130mil.), 95% of the funding will be provided by the National Strategic Reference Framework, which is the highest participation rate that has ever been given in the European Union.

Furthermore, for the coming years, PPA has focused its efforts to: (a) organise the European Maritime Day in 2015, (b) to organise for the first time in Greece the ESPO General Assembly and Annual Conference in 2015in Piraeus and (c) to commemorate the anniversary of 2, 500 years of the Battle of Salamis in 2021, when it is expected that Piraeus and Salamis will jointly become The European Capital of Culture.  PPA is already progressing the regeneration and creation of a Cultural Coast with 180.000 m2 of open spaces, three museums and theme parks. All these events are some of the positive perspectives for the region’s development and particularly for the cruise sector.

In two weeks, time, the European port industry is heading for Gothenburg for ESPO’s annual Conference. The Port of Piraeus is our next host.  Even if it is far too early, what could participants expect?

Piraeus will be the ultimate capital of the maritime industry in 2015, as it will host in that same week the ESPO Conference 2015 and the European Maritime Day! It will be a unique gathering of the leaders of the European maritime policy combined with the famous Greek hospitality. European Commission Officials, Ministers, Top Managers of European ports and representatives of all major players of the maritime business will be here. Looking forward to seeing you all in Piraeus!