Winners of the first ever BIMCO Awards announced 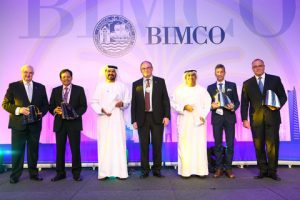 Last night in Dubai, BIMCO announced the winners of their first ever set of awards for the shipping industry, following its annual conference in the same location yesterday.

The awards were created to celebrate and highlight shipping companies and individuals who have excelled in areas reflecting BIMCO’s global activities.

The BIMCO Regional Shipping Personality of the Year, sponsored by ClassNK

This award is for an individual who has made an exceptional personal contribution to the industry in the Middle East over the last 12 months.

The BIMCO Shipping Company of the Year, sponsored by Oman Shipping

For a company which has demonstrated innovative customer service, business profitability and solid service reliability. 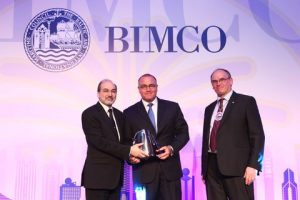 For a company which has invested in new facilities, courses, delivered growth in number of students and/or graduates and demonstrated innovative teaching methods.

This award is named after two of BIMCO’s founding fathers, whose vision was to create standard forms of charter party, the basic principle that underpins BIMCO’s documentary activities today. It recognises significant contributions to raising standards in shipping contracts and clauses through the development, use or active promotion of BIMCO forms. 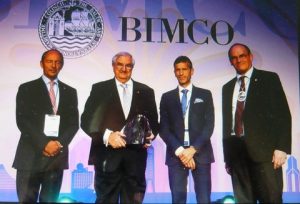 The winner is John Tsatsas, announced by Karel Stes from Exmar and Francis Sarre from CMB.

Presented by BIMCO President John Denholm, this award honours an individual or a company who has made a significant contribution to shipping and the maritime industry. The President in fact gave the award to the Saverys family, and said:

“This family took control of a traditional shipping company with liner and bulk shipping interests in 1991. Almost immediately thereafter they started to sell the liner business and the peripheral businesses and in 1995 set up a tanker business.

“In 2003 they demerged and floated their Gas Shipping business. This business alone today has a value of around $1 billion.

“The following year in 2004 they demerged and floated the tanker business. This business today also has a value of around $1 billion.

“More recently the family started a container ship owning business and the original company they took control of – which is now focused on dry bulk trades – currently has a value of around $900m.

The Saverys family have created extraordinary value in the good times and have maintained it through the downturn and it is for this reason I have chosen them to receive the President’s award. The family is of course led by Marc (with close support from his sister Virginie) and his bother Nicolas Saverys and their companies are CMB, Euronav, Exmar, and Delphis.”

•   BIMCO is a shipping association providing a wide range of services to its global membership of stakeholders who have vested interests in the shipping industry, including shipowners, operators, managers, brokers and agents.

•  65% of the world’s commercial fleet belong to BIMCO members

•  The association’s main objective is to facilitate the commercial operations of its membership by means of developing standard contracts and clauses, and providing quality information, advice, and education.

•    BIMCO promotes fair business practices, free trade and open access to markets and is a strong advocate for the harmonisation and standardisation of all shipping related activity.

•    Accredited as a Non-Governmental Organisation (NGO) with all relevant United Nations agencies and other regulatory entities, BIMCO actively promotes the application of international agreed regulatory instruments.