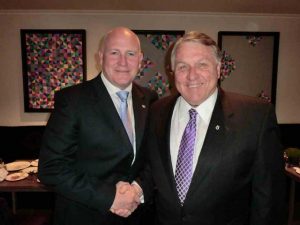 13 May 2014 – A joint team of Teamsters, ITF and Unite the Union members will challenge international transport group National Express at its annual general meeting (AGM) in Birmingham, UK, tomorrow. They will urge the company and its shareholders to act to address glaring inequalities in its treatment of workers at its North American subsidiaries, Durham School Services, and Stock Transportation.

To prove how seriously the issue needs to be tackled the Teamsters have sent a team including three Durham school bus workers – who will talk about the substandard conditions they and their young passengers experience – and the union’s president, James Hoffa.

Hoffa explained: “These men and women work hard transporting our children. They deserve better from this company. We are here in the UK to stand with Durham school bus drivers and monitors from the United States. We are letting the National Express board know firsthand that this company is mismanaging its most valuable asset, the workers, and placing the long-term value of the company at risk.”

He continued: “We’re fighting back for school bus workers at National Express. Together, our strong unions are sending a clear message that it needs to clean up its act.”

ITF inland transport section secretary Mac Urata will be one of the ITF team speaking up inside the AGM tomorrow. He explained that this is just the latest move in a continuing campaign to drive up standards in National Express’s North American companies, and will be the first time that large UK pension funds have submitted this type of resolution. He pledged that ITF unions would continue to fight for the highest standards in every country in which the company operates.

To help persuade the company go to http://action.shareaction.org/page/s/national-express-get-on-board-with-workers-rights