Lloyd’s holds its first US meet the market 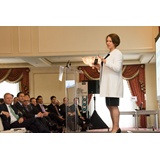 Wednesday 14 May 2014 – In early May Lloyd’s took its popular Meet the Market event to Boston, the first such event in the US, and the first visit for Lloyd’s recently appointed Chief Executive Officer to North America. (source: Lloyd’s of London)

The event, which attracted 190 attendees, was an opportunity to raise Lloyd’s profile in the US amongst retail, wholesale and reinsurance brokers and coverholders, according to Glenn Dorr, Lloyd’s Northeast Regional Director.

“The Meet the Market event in Boston was a great way for us to bring Lloyd’s to the Northeast region and Boston in particular, ” says Dorr. “Lloyd’s has a long history of serving the US insurance market while many Boston institutions and companies share close working ties with the UK, ” he adds.

In her first visit to the US since joining Lloyd’s as Chief Executive Officer in January, Inga Beale reminded attendees at the event of Lloyd’s close ties to the US that stretch back through much of the market’s more than 325 year history.

In particular, Lloyd’s has helped fund many of the largest insurance claims in the US, including the Great Fires in Chicago and Boston in 1871 and 1872, the 1906 San Francisco earthquake, as well as the terrorist attack on the World Trade Centre in 2001 and the devastating Hurricane Katrina in 2005, two of the largest losses in Lloyd’s history.

Growth in part reflects the improving US economy, as increased economic activity helps push up demand for insurance, explains Dorr. However, demand for the kinds of specialist insurance products that Lloyd’s underwriters offer is growing above and beyond that driven by the expanding economy, he explains.

Demand from US businesses has also been growing for specialist insurance products to offset risks, like those associated with the use of technology and international trade, according to Dorr. US companies are demanding specialist insurance solutions like cyber, trade credit, political risk and terrorism cover to name a few, areas that Lloyd’s underwriters excel in, he says.

For example, one such specialist trade credit insurance provider, Equinox Global, has recently established a presence in New York. The Lloyd’s coverholder has grown significantly in North America, and the opening of its New York office is expected to enable the company to get even closer to the US market and clients, explains Antje Seiffert-Murphy, head of Equinox North America.

“Apart from the advantages of a local presence, Equinox Global can also capitalise on a very strong global Lloyd’s licensing network supporting US companies and their subsidiaries abroad for insurance needs. Equinox Global, and Lloyd’s in general, are also set up to serve US clients through a very customised approach in terms of policy structure, ” she says.

Lloyd’s is an important provider of insurance for large and complex risks in the US insurance market, according to Richard Ohlson Head of Broker Relations at Amlin, an insurer at Lloyd’s. The market is currently the number one excess and surplus lines insurer in the US, and the third largest supplier of reinsurance.

The US is a highly developed market with high values at risk, which generates a lot of demand for specialist surplus lines insurance cover and catastrophe capacity, according to Ohlson.

“Brokers and their clients value the expertise of Lloyd’s underwriters, their ability to be innovative and provide bespoke solutions for difficult risks, as well as significant capacity, ” he says.

Lloyd’s is a well-established brand in the US, but has stepped up its efforts to improve the market’s “visibility” in North America, especially in regional and local markets, says Dorr.

For example, Dorr, one of Lloyd’s five regional representatives in the US, recently attended insurance events in Pittsburgh and Buffalo. And around 80 Lloyd’s market participants manned the Lloyd’s stand at RIMS, the largest industry conference in the US.

“We have to find ways in which we can help business find its way to the market. So it’s good to get out there and put a face to the name at Lloyd’s, ” says Dorr.

Underwriters at Lloyd’s have licenses in Illinois, Kentucky and the US Virgin Islands and are approved surplus lines insurers in all US jurisdictions.

Lloyd’s is also an accredited reinsurer in all 50 states. (Legislation granting Lloyd’s dual status in Kentucky will take effect in July 2014).

Since the 1990s, almost 40% of Lloyd’s global annual premium has come from the US.