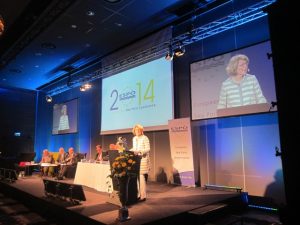 More than 240 participants gathered in Gothenburg for the 11th edition of ESPO’s annual conference.

The event concluded today with the presentation of ESPO’s memorandum for the European elections in which European port authorities identify six points of attention for the incoming Parliament and Commission:
1. Important role of transport and ports in the move towards economic growth
2. No ports no industry
3. Ports in the TEN-T policy: from word to action
4. The internal market for maritime transport, no time to waste
5. European ports in an economic, societal and environmental context
6. A ports policy that empowers Europe’s ports to meet tomorrow’s challenges

The text of ESPO’s memorandum outlining ESPO’s priorities in these six areas can be downloaded here.

Other highlights of the Conference were:

Clear plea for more clarity on state aid from both the port sector and the Council
In his keynote speech, the Greek Minister for Shipping, Maritime Affairs and the Aegean and President of the Transport Council, Miltiadis Varvitsiotis, asked the new Commission to come up “with a stable and clear framework for state aid in ports in order to ensure that each investment does not have to be investigated on a case by case basis. This case by case approach causes delays in investments and harms the competitiveness of European ports”.

The Commission from its side considers that some basic principles on transparency as provided for in the Port Regulation proposal are a pre-condition for developing a framework on state aid for ports. In his intervention on Thursday afternoon, Olivier Onidi, Director for the European Mobility Network in DG MOVE spoke about “a two-step approach”.

MEP Knut Fleckenstein to continue his work on the port regulation after the EU elections
In full campaign, the Rapporteur for the Port Regulation proposal, Knut Fleckenstein joined the conference to give his views on the way forward with the Port Regulation proposal after the EU elections. He stated that there should be more flexibility when it comes to the setting of port infrastructure charges, the consultation bodies and the supervisory body. On the other hand, he was calling for a stricter framework on transparency in port accounts.

Mr Fleckenstein stressed he wanted to continue to work on the Port Regulation proposal. He stated that all main policy players had or would be changing in the coming months: the shadows, the Commissioner, the Director General.

“We can look back at a successful conference and event here in Gothenburg. We are happy that the Council is helping us in putting the state aid guidelines for ports on the political agenda. The presence of both the Commission, the Parliament and the Council allowed us to have a good debate on the best policy for European ports. We hope to continue this constructive dialogue with the incoming European Parliament and Commission”, said ESPO Chairman, Santiago Garcia Mila.

The next edition of ESPO’s annual conference will take place in Piraeus on 21 and 22 May 2015.
All presentations and pictures of the conference will be uploaded on the ESPO website early next week.