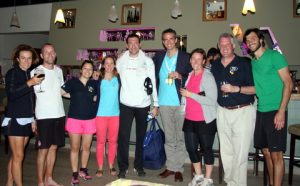 David Marock, CEO of Charles Taylor, awarded the trophies to the winners and thanked all
the players for participating. David commented:
“The Greek Shipping Open has quickly made its mark as one of the key dates in the Greek
shipping calendar. Yet again we saw a tremendous standard of tennis in all the
competitions and I would like to congratulate the winners on their achievement.”

Andrew Paton, Managing Director of Richards Hogg Lindley, and Philip Stephenson,
Regional Claims Director of The Standard Club, thanked everyone for supporting the event
and having the opportunity to meet so many shipping colleagues. Celebrations continued
with a reception for all players and non-players.

The tournament proved to be a great success with the Greek Shipping community
embracing the event with enthusiasm and spirit. The participants were satisfied with the
excellent organization and the relaxing atmosphere that prevailed throughout the
tournament.

During the tournament, the spectators donated €1, 851 to support the “The Ark of the
World”, an association supporting abandoned children. Mrs Marigianna Tagari was present
to receive the money collected.

By popular demand, Charles Taylor committed to hosting again the tennis tournament in
May 2015.

About Charles Taylor plc (www.ctplc.com)
Charles Taylor plc is a leading provider of professional services to clients across the global
insurance market. The Group has been providing services since 1885 and today employs
over 1, 000 staff in 60 offices spread across 25 countries in the UK, the Americas, Asia
Pacific, Europe and the Middle East.

The Group offers services, principally on a fee-based model and operates through three
businesses – Management, Adjusting and Insurance Support Services. It also own insurers
in run-off.

Charles Taylor’s vision is to become the professional services provider of choice to the
global insurance market.

About Richards Hogg Lindley (www.rhlg.com)
Richards Hogg Lindley (RHL) is a member of the Charles Taylor group of companies. It is a
leading provider of independent marine claims advice on coverage and quantum issues. As
a global average adjuster, it is able to handle complex hull and machinery cases, shipyard
losses, loss of hire claims and the largest general average losses. RHL’s worldwide team
includes more Fellows of the Association of Average Adjusters than any other business.