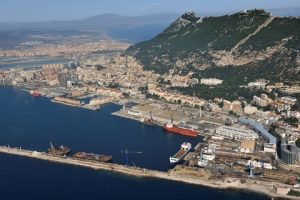 Gibdock has completed its first shiprepair project for Tsakos Shipping & Trading, one of the leading owners within the Greek shipping market. The Gibraltar yard undertook damage repairs to the 221m long, 2824 teu capacity containership, Irene’s Rainbow, which is part of the 70+ vessel fleet operated by the Tsakos Columbia Ship Management (TCM) joint venture.

The scope of work undertaken alongside included steel hatch cover repairs, which consisted of the renewal of damaged top plate. In addition the yard carried out non-destructive testing, as required by Class, including Hatch Internal Stiffening and preservation works after the repairs.

The visit of the 39, 241 dwt, 2006-built Irene’s Rainbow drew strong positive owner feedback, according to Gibdock’s Greek representative, Hellenic Industrial and Marine Agencies Managing Director Alkis Koukis. “This was the first Tsakos-owned vessel to be repaired in Gibraltar and the company has said that it would have no hesitation in using the yard again in the future. This could be the start of a long term relationship.”

Gibdock’s geographic location was a factor in the contract being awarded, but it was the yard’s professionalism that impressed the Greek owner, says Mr Koukis. “Our client wanted repairs to be carried out quickly and for the vessel to be redelivered on time. The workmanship was outstanding and Tsakos is already looking forward to the next cooperation.”

The Irene’s Rainbow contract could also pave the way for further orders from the Greek shipping community, Mr Koukis believes. “Tsakos is an organisation with high standards, and to get glowing reports from them will encourage other Greek owners to consider Gibdock for their ship repair and maintenance requirements.”

Gibdock is targeting the Greek market as one with considerable potential for the future. Managing Director, Richard Beards, says: “We were delighted to have the chance to show Tsakos what we can do and look forward to working with them again in the future. We are receiving more enquires from Greek owners for a mix of vessel types, and we are optimistic that these enquiries will translate into some firm projects later this year.”

Tsakos Columbia Shipmanagement (TCM) provides management, operation and crewing services for a diversified marine fleet consisting of tanker, container and dry cargo vessels. The fleet includes a wide range of tankers, from small product carriers to VLCCs, container vessels up to 5, 000 teu capacity and bulk carriers up to 180, 000 dwt. TCM was established in July 2010 in Athens as a joint venture between Tsakos Shipping and Trading, which was founded by Captain Panagiotis Tsakos in 1970, and Schoeller Holdings.

The British Ambassador addresses the International Conference, Resistance and the Jews in Europe 1939-1945 – Greece