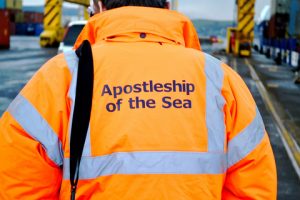 British author and maritime industry commentator Rose George has lauded the role of seafarers’ charity Apostleship of the Sea (AoS) and praised seafarers for the work they do ahead of the annual Sea Sunday celebrations on July 13.
George who wrote the book “Deepsea and Foreign Going: Inside Shipping, the Invisible Industry that Brings You 90% of Everything” says Sea Sunday is a great opportunity to publicly appreciate the work of seafarers and the vital work they do.

“Like most people in Britain, I didn’t encounter the life of people who work at sea until I began to research my book. One of the first things I did was visit the seafarers’ centre in Felixstowe, and this was the start of a long fascination with, and great respect for, the men and women who run these centres around the world, ” says George.

She adds, “I ended up writing about the Apostleship of the Sea port chaplain in Immingham, as it’s the nearest port to Leeds, where I live, and spending time with Father Colum Kelly. It was an education: Father Colum’s dedication, kindness and generosity soothes many a visiting seafarer. I called his work “a ministry of small gestures, ” because sometimes all he will do is fetch batteries or a Sim card. But this small gesture, when you have been at sea and – with the pace of modern shipping – rarely have more than a couple of hours ashore, has an enormous impact.

“I salute the tireless work of Apostleship of the Sea port chaplains and volunteer ship visitors, and wish only that they got more support from the industry, and more recognition, for the wonderful and valuable work that they do, in all weathers, for anyone who needs it.

“Sea Sunday is a wonderful opportunity to publicly appreciate the work of seafarers, who bring us everything we need to survive, and of the invaluable ministry of Apostleship of the Sea, without which the lives of modern seafarers would be so much harder.”

One example of AoS’ work supporting seafarers was when Douglas Duncan, chaplain in north-east Scotland, recently received a call to say that Norman, a Filipino seafarer, had taken ill on a supply ship working out of Peterhead. Doug immediately went to visit him in Aberdeen Royal Infirmary.

He provided him with phone cards, money, wi-Fi, food, and arranged for his washing to be done. He then met Norman’s doctor, who suggested the seafarer would benefit from a day out. Doug picked him up and took him to the Aberdeen Seafarers’ Centre, where he met with some other Filipinos. This contact lifted Norman’s mood and left him feeling much better.

During the annual Sea Sunday celebrations, churches across Great Britain and the world remember seafarers and pray for them, their families and those who support them. For more information about Sea Sunday go to http://www.apostleshipofthesea.org.uk/sea-sunday