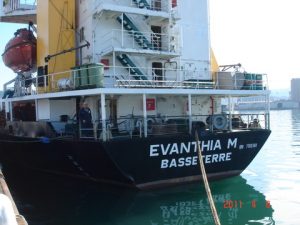 With 24 detentions from 307 inspections in the period 2011-2013, the registry now sits midway in a spectrum ranging from White List flags – those with a consistently low detention record – to poorly performing Black List flags.  The achievement keeps SKANReg on course for targets it set in 2012 – to make the Grey List within two years and the White List after a further two years.  The registry became operational in 2005 – part of the government’s drive towards a service-based economy after the sugar industry faded – and aims to become a Top 20 flag by GT over the next ten years.

The latest Paris MoU listings took effect last month.  Elsewhere SKANReg has been off the US Coastguard targeted list since last year and continues to rise in the Tokyo MoU Asia/Pacific rankings, where it is poised to earn Grey List status in next year’s listings.

The registry’s progress was underlined last October with a positive report under the Voluntary IMO Member State Audit Scheme (VIMSAS), which allows maritime administrations to apply for an external audit of their safety and environmental compliance.  After visits to the London and St Kitts & Nevis offices, IMO auditors confirmed that SKANReg ‘substantially complies with its obligations under the international conventions’.

Registrar Nigel Smith explains: “We volunteered for the audit to help us identify where and how we could improve our procedures, compliance and implementation of IMO instruments.  I am pleased to say that opportunities to improve our performance were in line with our own assessments and this will act as a tool to drive further enhancements in all aspects of our service.”

The ship registration office in London has also just passed its annual quality assurance audit, helped by ongoing investment in IT systems.  New enhanced registration software is currently in test phase and will be fully operational by the end of this year.

Meanwhile the registry’s improved PSC performance stems from a string of quality initiatives launched in 2011.  Control measures were tightened to include risk profiling of registration applicants and daily analysis of PSC website reports to speed follow-up action.  A ‘three strikes and out’ written warnings policy for repeat detentions was also implemented.  Last year this sanction saw three ships removed from the register.

With new registrations now averaging around 100 per year, the current SKANReg fleet of 540 vessels totals 2.5 million gross tonnes.  The main vessel types are general cargo ships and small tankers, but the fleet includes 200 smaller units such as accommodation barges and jack-up rigs.  Small ships and bareboat charters are among several niche markets served by St Kitts & Nevis, which is also one of the few states to provide short-term registrations for delivery and demolition voyages.

The fisheries sector is an emerging market for SKANReg after more than two years as a cooperating party to the North East Atlantic Fisheries Commission, which regulates the transhipment of fish catches.  In a further development, the registry has become the first state outside the EU and Russia invited to sign an agreement with Norway for the automatic electronic reporting of fisheries data, and is now seeking to expand its fleet of refrigerated cargo vessels.