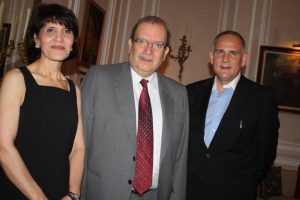 A London occasion has enabled the Blue MBA – the Executive MBA in Shipping & Logistics based at Copenhagen Business School – to extend its global links, through reinforcing its connections with Latin America.

The closer relationship was in focus when some 30 members of the class of 2015, the current intake, were welcomed to a reception at the Bayswater residence of Peru’s Ambassador to the UK, His Excellency  Julio Muñoz-Deacon, and his wife Marcela. The executive students were in London for the module covering investment analysis, finance and risk management, within their part-time degree course. 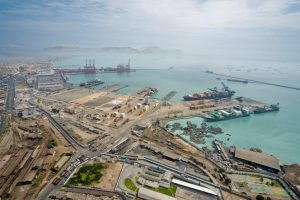 Since its launch in 2001, the Blue MBA programme has graduated participants from 35 countries, and its international emphasis is one of its strengths. One of the current participants is based in Peru: Reynir Gislason, a one-time leader of Iceland’s Eimskip, has for the past seven years been working from Lima as executive president  of International Freight Shipping, SAC, a non-vessel operating common carrier for consolidated cargo and full container load imports and exports.

Peru, the third largest country in South America after Brazil and Argentina, has brought its maritime role increasingly to world attention.

The Ambassador underlined to guests at the reception the scale and variety of his country: it is larger than Germany and France combined, has a 2, 000 km Pacific coastline, and 11 widely varying eco-regions, ranging from cold and tropical seas, to desert, high Andean plateau and Amazonian jungle (the last covering more than 50% of the land).

He said that Peru has free trade agreements with the US, European Union, Japan and China, and works closely with Mexico, Chile and Colombia.  It is a top mining country, being a leading producer of gold, silver, copper, zinc, lead and iron ore (the main mining companies have concessions to run their own port terminals). Mining, fishing and agriculture have supported the country’s brisk economic growth of recent years. 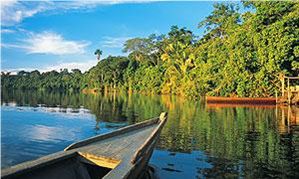 Mr Gislason thanked Mr Muñoz-Deacon for his generous welcome and echoed his remarks about the enormous variety and impressive history of Peru – the gathering heard that the Incas had built structures that could withstand earthquakes.

Blue MBA programme director Irene Rosberg added that she and the MBA course participants felt privileged to be invited to the residence, and she presented the Ambassador with a model of a Viking ship as a memento of the evening.

The pride of the Latin American nation in its shipping role was spelled out in an official brochure in 2013 that declared: “Peru is a maritime country by nature.” It said that the state is implementing an ambitious programme of investment in infrastructure and operations, to optimise the security and efficiency of ports, and building regional roads, developing logistics areas and connecting coastal ports to riverside ports. It has legislated to increase turn-round in ports. Led by the biggest such centre, Callao, 15 national ports are certified in accordance with the International Ship and Port Facility Security Code.

A member of the International Maritime Organization since 1968, Peru has implemented all IMO mandatory instruments and most of the conventions, codes and resolutions. It takes a special interest in the United Nations body’s activities in relation to safety and the marine environment.  Peru has been elected a member of the IMO council four times: in 1977, 1979, 1987 and 2013, meaning that attending to IMO matters is an important part of the duties of Mr Muñoz-Deacon.

Referring to enhanced interest in Peru, Mr Muñoz-Deacon once told Embassy magazine: “Britain has rediscovered Latin America. The last time the UK was this active on the continent was in the 19th century when Admiral Thomas Cochrane’s British naval ships helped liberate Peru.”

The Executive MBA in Shipping and Logistics was initiated in recognition of industry demands to prepare maritime professionals to deal with the challenges of globalisation. The professional life of the students as a whole encompasses most avenues of shipping, forwarding, shore operations, logistics, energy, law and insurance.  Ms Rosberg told the 2013 MBA graduation ceremony that in the field of advanced maritime education, “we are now considered the best in the world.”