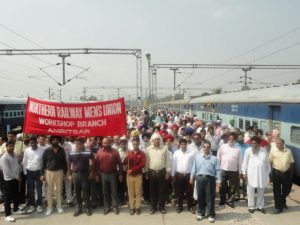 An estimated 500, 000 rail workers in India took part in a country-wide protest against government privatisation plans on 19 September.

The All-India Protest Day was organised by the ITF-affiliated All India Railwaymen’s Federation (AIRF), one of the country’s biggest railway employees’ unions. It was in response to government moves to allow foreign direct investment (FDI) in the rail sector and encourage investment through the public-private partnership (PPP).

AIRF general secretary Shiv Gopal Mishra said: “This enormous turnout at our demonstrations at 74 regional rail head offices and nine production units shows the strength of feeling against the government’s plans. FDI will not be beneficial to the Indian railways – it will divide the rail operation and ultimately bring in disinvestment and multinational corporations.”

The protests are supported by the ITF, in line with a decision by the federation’s congress in August to commit the ITF and its affiliates to fight attacks on rail privatisation, deregulation and liberalisation. The ITF and its railway section have resolved to develop a network of affiliates that will mutually support rail unions which campaign against further changes in their freight and passenger transport systems based on the neo-liberal policies that many governments adopt today.