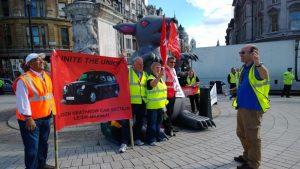 Over 1, 000 London taxi drivers took part in a demonstration on 24 September to protest against the London mayor’s failure to protect the iconic black cab from unregulated competition.

Several organisations and unions took part, including ITF affiliates Unite and the RMT.

Taxi drivers say that the Transport for London (TfL) regulatory authority has outsourced many of its responsibilities to private agencies, with the net result being a deep fall in service levels and ever increasing costs to the trade.

Peter Kavanagh, Unite London and Eastern regional secretary, said: “Boris Johnson’s time as Mayor has been a complete disaster for the London taxi trade – from failing to tackle the increasingly hazardous rickshaw brigade to allowing the Uber app, which doesn’t take bookings or even pay tax in this country, to be licensed as a private hire operator.” Uber is encountering stricter laws in some countries than in London.

Lobbying by taxi firms in France has led to a new law, one provision of which bans ride-sharing services like Uber from using GPS systems to alert users to the location of nearby cars via smartphone.

In Canada, the City of Ottawa has ruled that Uber needs to be licensed to operate in the city.

On 15-16 September the ITF met affiliates from the United States, Canada, India and Europe who are involved in organising taxi workers to agree responses to the growth of taxi app companies. It is also organising a major protest on 8 October, during its action week ‘Transport workers fighting back! Organising globally!’, and is urging all road transport and railway workers to take part. [link to www.itfactionweek2014.org]