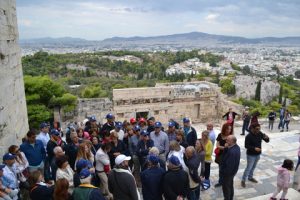 From the guided tour..

Over eighty members from the Chios Marine Club together and their guests/friends visited the Acropolis, where amongst others, The Parthenon  and other monuments stand. The Parthenon is the most impressive monument of Greek Architecture! 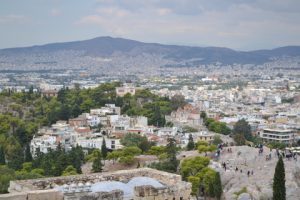 A stunning view of the Athenian plain…

It was an interesting tour  which took place last Sunday; a homage to Ancient Greece, History, Ideals, Traditions, Classical Heritage! The Acropolis is one of the most visited sites on the globe and for the shipping Industry’s cruise sector and tourism in general, is humanity’s  must-visit sacred places! Thousands of passengers from cruise ships are guided there learning a bit of magnificent Greece, and in particular about the Athenian Hegemony!

The adjacent Museum, at the western sloap/road leading to Acropolis,  the New Acropolis Museum as it is called, which finally was constructed a few years ago to house, amongst other treasures, the Parthenon Marbles from the British Museum – where same  where expected to be housed, is yet another place for all to visit. 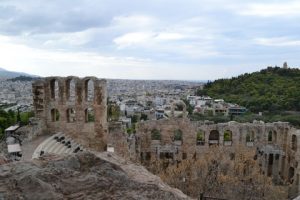 Congratulations to the Chios Marine Club secretariat for organising this visit, from where one can see the entire Athenian plain…

The Challenge of Restoring Debt Sustainability in a Deep Economic Recession: The case of Greece