From Eco ships to eco-shipping 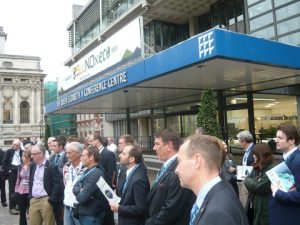 As you read these lines, one of the most important conferences ever held in London, the administrative capital of Shipping, on the “Ship Efficiency: THE EVENT Conference 2014” at the Queen Elizabeth II Conference Centre, is underway.

Organised by specialists Fathom Eco-Efficiency Consultants proves to be one of the best ever I have attended over the last 30 years in London; unfortunately though due to my …latent defect – pulled my back yet again, I missed the opening and few speeches but managed to attend during the afternoon sessions some more than interesting debates, particularly the one with the IMO Panel Discussion. 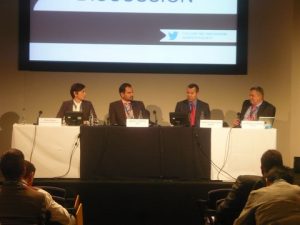 The discussion was chaired by Lars Robert Pedersen, BIMCO’s Deputy Secretary-General, and comprised from Katy Ware, Permanent Representative of the UK to IMO at the MCA; Jesper Loldrup, Head, Policy and Planning Unit at IMO and Arsenio Dominguez, the MEPC Chairman. Their deliberations will be read in this medium once we have the full reports from the organisers. Overall an excellent panel with a lot to be debated. There was emphasis and certain pathos from Katy Ware, but her points where absolutely right! Jesper Loldrup position was promising as did Arsenio Dominguez’s. 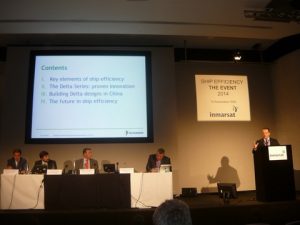 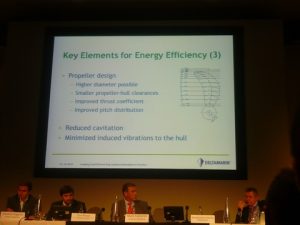 Konstantinos Fakiolas took the podium and delivered an excellent slides paper on “Enabling sustainable energy & fuel efficiency from concept” warmy applauded by the audience and receiving three interesting questions. One of his slides….

Mark Cameron’s presentation was on “What gets measured gets done”; In one of his meticulously prepared slides there was an interesting header/question: “What happens when you empower your ships-staff to make real operational decisions to save fuel?”

Cirro Russo’s paper was on “What’s the return on investment?” with excellent slides too. I was impressed to read in one of his slides’ questions on  “what are the variables which influence  IRR of an investment in eco-design vessel” ; excellent. 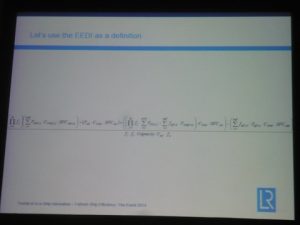 Lloyd’s Register’s Dimitris Argyros slides where equally top of the range. The high calibre specialist included a slide with reference to the EEDI under the title: “Let’s use the EEDI as a definition” which included a very interesting formula! 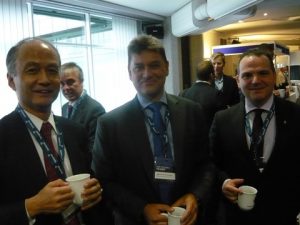 After a short coffee break, where there was a good chance to see the various exhibition booths and meet with the organisers, speakers from the previous panel, friends from the past but also fellow Greeks from the Greek Shipping London fraternity* and meet delegates for networking too we returned back upstairs in the 6th floor auditorium for the final session of the day, that of “Making the machinery work smarter”.   Chaired by Lars Robert Pedersen yet again. 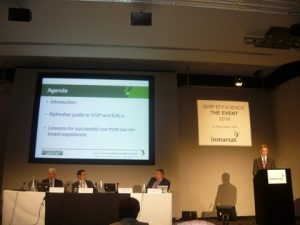 The first speaker Peter Vickers, coming from one of the UK’s oldest family companies, delivered an excellent paper on “Getting the best out of EALs – lessons from two decades’ marine experience”. Worth remind you the factor of experience as same appeared in one of his slides, saying “Lessons for success from our on-board experience”.

Then come Henrique Pestana, head of ship design of the ABB Group with a super slides presentation on “One hundred and ten years of electric propulsion:  main drivers and future trends”, expressly directing us to electric propulsion; the figures more than impressive!

Last speaker was the ever very eloquent and persuasive Stephen Bamford, a non executive director of the well known SulNOx Fuel Fusions which we and our viewers know form their various news and reporting; his paper was on “Achieving compliance through emulsification”  – excellent slides though on one the figures on pollution from some 26 of the world’s biggest ships cannot in any way equal the emissions from cars. I must reiterate that shipping has the less emissions and its pollution level is below 3 (three) percent of the total, in fact just 2, 7 centum! Anyway. 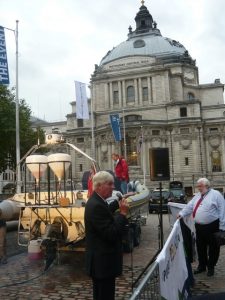 Stephen Bamford during his live presentation of the SulNOx product!

An interesting Q&A followed before we all went oustside the QEII Centre for a fuel fusions live product demonstration on SulNOx by Stephen Bamford; one of the best that I have witnessed during the last three decades over here in the UK! Never before such a demonstration took place in broad day light at the Forecourt of the QEII Centre inWestminster!

Back to the 5th floor for networking and the drinks reception.

Now during the morning sessions which I have missed due to my worsening back-ache, there were some friends speaking and we are pleased to present one of such speeches by Yasushi Nakamura, executive vice president of ClassNK on “ From Eco ships to eco-shipping”, during the first  main panel under the title “ The state of the industry keynote session”. Viewers can log on here and see the presentation:Fathom Ship Efficiency 2014 v8

We look forward receiving from the organisers the recap of this two-day event when we will present same in full.

As said above this was one of the best ever events in the last three decades in London and quite frankly worldwide! A great thanks goes to all sponsors**, but especially to INMARSAT for being the lead sponsor in this unique event! All major and important companies as well as association and organisations of the maritime industry where there duly represented in full order and,   yes, strength and all letters of the alphabet where there except Q and Y! The Press and the Media as well as many media consultants where also present; a lot to report! A lot to promote! Watch this space!