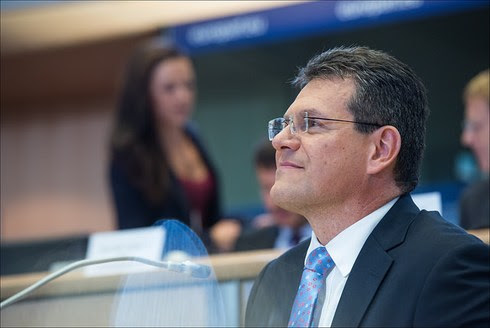 Sefcovic Commissioner-Designate for Transport and Space Maroš Šefčovič was scrutinised yesterday by the European Parliament’s (EP) Transport and Tourism and Industry, Research and Energy Committees in the context of the EP hearings of the team of Commissioners fielded by President-Elect of the Commission Jean Claude Juncker.

In his opening statement, Mr Šefčovič focused on the importance of transport and well-functioning infrastructure for European competitiveness. He highlighted among others the key role of EU ports, which, according to him, should be modernised and better linked to the TEN-T network. Regarding the social aspects of the ports package, he added that the EU ports reform is a sensitive topic and advocated better cooperation with social partners while hinting at the need for confidence building measures.

During the three-hour EP hearing, Mr Šefčovič also made reference to the need to make much-needed progress on the European Maritime Transport Space without Barriers, a Commission initiative launched in 2009 to streamline administrative formalities for shipping, simplify customs procedures and cut red tape.

On the sensitive issue of CO2, Mr Šefčovič underlined the importance of reducing emissions from shipping and making progress in setting binding international standards for the environmental performance of ships. This should be achieved by striking the right balance between international regulation, EU rules and national responsibilities and stresses that international cooperation in the International Maritime Organisation (IMO) is crucial in today’s globalised economy if shipping is to be made more sustainable while remaining competitive.

Mr Šefčovič seemed to be well aware of the Transport sector’s image problem and the resulting lack of interest of the younger generation in working in the transport industry. He warned against the possible loss of EU know-how and spoke of the need to change prevailing perceptions.

Commenting on these early samples of Mr Šefčovič’s policy priorities, Mr Patrick Verhoeven, ECSA Secretary-General said: “We are happy to note that Mr Šefčovič is well versed in the needs of the European transport industry. We are also delighted that he recognises the specificities of the shipping industry, particularly its need for international regulation. Global movers need global rules, especially on sensitive issues such as CO2 emissions from shipping. We are confident that Mr Šefčovič will successfully obtain the EP’s approval and we look forward to building a strong and lasting relationship with him.”

“We warmly invite Mr Šefčovič to attend our upcoming event and highlight the Commission’s priorities for the shipping industry by speaking at our high-level flagship conference” concluded Mr Verhoeven.

The EP hearings will run until 7 October. Subsequently, MEPs will vote on whether to approve the Commission as a whole. The vote is scheduled for the plenary session from 20 to 23 October. If the new Commission gets the approval of the EP, the new College of Commissioners will take office as of 1 November.

From Eco ships to eco-shipping