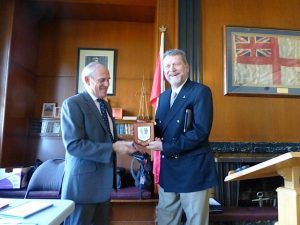 London, Monday, October 6. Leading representatives from Search and Rescue (SAR) Operations in Canada and trustees of the International Maritime Federation (IMRF) have met to discuss the challenges in the area, including the possible opening of the North West and North East passages to shipping.

The IMRF Trustees were hosted in Vancouver, Canada, by IMRF members, RCM-SAR with the support of the Canadian Coast Guard, Port Metro Vancouver, JRCC Victoria and Canadian National Defence.

Two full days of seminars were held at HMCS Discovery on the Vancouver harbour with over 50 delegates attending from Maritime SAR services both local and National.

Discussions and presentations looked at the structure of Maritime SAR in Canada, took in case studies highlighting the challenges of rescue in some of the more remote areas of Canada and provided an update on the development of RCM-SAR from standardising vessels to their new proposed training facility.

Port Metro Vancouver presented on the recently established Marine Emergency Co-Ordinating Committee (MERCC) which brings together all the organisations who have a stake in maritime SAR operations in the port area to build relationships so there is “no need to exchange business cards in the middle of an emergency”.

IMRF Trustees, Captain Rolf Westerstrom, James Vaughan, Captain Udo Fox and Captain Song provided international viewpoints on maritime SAR developments in their respective countries and SAR organisations. MRO Project Manager David Jardine-Smith provided an overview of the key Mass Rescue Operations Project reflecting on some of the emerging challenges faced in Canada with the melting of the Arctic ice cap and the potential for increasing traffic flows through this remote region.

In his closing remarks IMRF Chairman Michael Vlasto said: “We have learned a lot during our time in Canada – you have shown us some of your impressive assets and given us a better understanding of the particular challenges of SAR operations in the future if the NW and NE passages open up as major shipping routes. In terms of best practice you have a lot to offer others in different parts of the world which could lead to more lives being saved as a result”

Randy Strandt from the Canadian Coast Guard added: “It was our great pleasure to host the IMRF Trustees and Staff in Vancouver. The value of sharing ‘best practices’ in maritime SAR cannot be overstated.  We have been significantly influenced and greatly improved over the past decade or so as a result of the unrestricted sharing of information with our SAR friends around the world.

“Our training standards, fundraising, SAR vessels, and operating procedures have all been developed in a substantial way through these interactions with IMRF members. We feel very confident in recommending to any maritime SAR organisation or their related agencies of the value of being closely associated with the IMRF. ”

Note to editors: The International Maritime Rescue Federation (IMRF) brings the world’s maritime search and rescue organisations together in one global – and growing – family, accredited at the International Maritime Organization (IMO).IMRF’s member organisations share their lifesaving ideas, technologies and experiences and freely cooperate with one another to achieve their common humanitarian aim: “Preventing loss of life in the world’s waters”. See:www.international-maritime-rescue.org