Reviving the Cyprus Economy – the role of Shipping 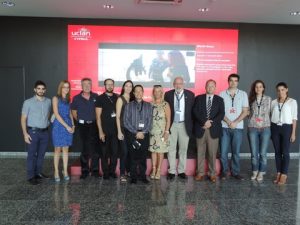 This programmed speech took place as announced earlier this afternoon at the Large Auditorium of UCLan’s prestigious academia buildings at Pyla, in Cyprus’ buffer zone off Larnaka.

The speaker was introduced by Pro. Panikkos Poutziouris and Dr. Loukas Glyptis with whom John Faraclas and AllAboutShipping.co.uk organised another successful event in London’s Hellenic Centre last April on “The development of Greek Shipping Dynansties: Successions across generations”. Given the forthcoming WISTA International AGM Conference the time for this presentation was more than ideal.

Over 150 students, professors, lecturers and practitioners – a multinational audience,  attended this event where John Faraclas in 35-minute speech, characterized by his usual pathos, gave an account of what really happens in all fronts this very moment and how shipping in its entirety can create jobs for the benefit of all under this latest worldwide economic decline which in the case of Cyprus had catastrophic consequences.

He was warmly applauded by the audience who admittedly have never ever before witnessed such a vigorous presentation in a field where Hellenism marvels, and it is now the turn of Cyprus to get out of this crisis, by adopting the sea-wise method, that in similar occasions was “employed” to have the Greeks in the mainland, some decades ago alleviate the burdens following WWII and the despicable Greek Civil War.

Gifts were exchanged by both sides – UCLan and Prof. Poutziouris handed over a desk plaque with the University’s logo and John Faraclas responded with two co(a)sters depicting the site’s logo, one for Prof. Poutziouris and one for Dr. Glyptis.  A discussion super took place later on at Larnaka’s seafront Militzis Restaurant where it was agreed to proceed with join events aiming in furthering education and shipping for the benefit of all.