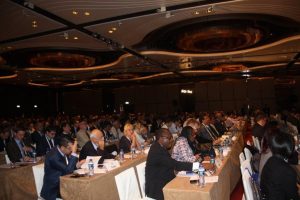 Underwriters from around the globe in session at IUMI.

Big challenges remain in encouraging countries to offer a place of refuge for distressed ships, the International Union of Marine Insurance was reminded during its 2014 conference in Hong Kong.

David Bolomini, a member of the secretariat of the International Group of P&I Clubs, summarised the seven obstacles frustrating action in cases of casualty:

Mr Bolomini said it was a challenge for sovereign states to introduce operational procedures for central and local government, agencies, and port and harbour authorities; and to introduce powers for independent decision making about accommodating ships in need of assistance (as in the respected UK system of appointing a Secretary of State’s Representative –known as the Sosrep – to provide overall direction for salvage, intervention and prevention of marine pollution). It was also a challenge for governments to make technical and time-critical decisions without delay or recourse to political authority; and to implement a stakeholder engagement strategy including the involvement of shipowners, insurers and others.

For the shipping and insurance industries, of major importance was the implementation of relevant International Maritime Organization conventions, including the protocols on preparedness, response and cooperation when there were incidents of pollution from oil, and from hazardous and noxious substances. The industries needed to encourage the use of the IMO Place of Refuge guidelines; and to deal with negativity from pressure groups, press, and others.

Governments needed to consider the challenges presented by major claims, preserve the principle of limitation of liability, and be involved in effective communication – ensuring that all parties were on the same side.

The ‘place of refuge’ quandary has been highlighted by notable recent cases in which pleas to allow a specific place to deal with casualties as safely as possible were rejected. Nation states have no obligation ininternational law to offer a place of refuge.

In mid-2012 the containership MSC Flaminia suffered an explosion and there was considerable wrangling over what to do with the vessel until Germany as the flag state took responsibility. Industry interests trying to assist the chemical tanker Stolt Valor,  damaged by explosion,  sought in vain for three months to find a solution, before the ship was allowed into Bahrain.  In December 2013, the chemical tanker Maritime Maisie, which caught fire after a collision, was forced to wait for 100 days in the Sea of Japan before South Korea eventually offered shelter in the port of Ulsan.

Perhaps the worst case in recent decades was that of the tanker Prestige when three coastal states in 2002 refused entry and the ship suffered catastrophic failure off the coast of Spain, causing massive environmental damage. The incident was the catalyst for the establishment of the European Maritime Safety Agency.

Mr Bolomini concluded that there was no need for panic responses and called for a Places of Refuge convention. Risk should be minimised by implementing effective emergency plans – with early communication with states and regions, ensuring transparency from all parties, working y to achieve a common goal, and building confidence among government decision makers.

“As we saw in the Prestige case, the wrong decision is as bad as no decision, ” the P&I expert told the conference.

Mr Bolomini accepted that some governments had limited resources to provide places of refuge and were concerned about the reimbursement of recovery costs, despite the protection offered by insurance.

Stephen Barr, outgoing chairman of the IUMI legal and liability committee, said: “We welcome the collaborative approach [to offering a place of refuge] rather than the legislative approach. The consequences we have seen of many actions can be disastrous.”

Earlier this year, John M Lyras, chairman of London P&I Club, said in his annual report: “There is no easy answer. It is understandable that communities in areas of coastline where refuge may be sought will be reluctant to be exposed to the risk of pollution. But, as the Prestige incident illustrated, and as the risk potentially posed by other ships highlights, there remains a compelling need for further concerted international action in this area.”