A Glimpse of Vibrant Rajasthan… 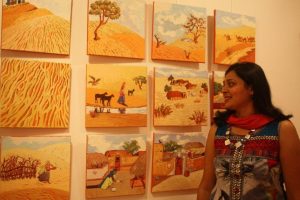 Namita Jain with her panels of village life in Rajasthan.

A Glimpse of Vibrant Rajasthan: superb paintings by Namita Jain at the Bhavan Centre, London,  By James Brewer

Namita Jain’s paintings are as mesmerising as her subject, the majestic Indian state of Rajasthan. She has a direct and entrancing way of evoking the simplicity of and her sympathy for the traditional ways of village and urban life.

The London artist, who was born near Pune in Mahrashtra, is like the thousands of tourists who visit the desert landscape each year enthralled by the kaleidoscope of colours and folklore. Hers was a brief stay, but it set her on a course which continues to this day of producing vignettes of innocent daily routines, many of which centre on the trip to the well to fetch water, and on melodious folk song and dance. 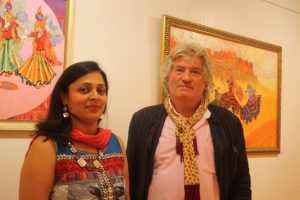 Namita Jain with James Horton of the Royal Society of British Artists.

This is a genre of painting that has fallen out of fashion in some contemporary circles, but Namita shows at its best how precious and timeless it is.

A magnificent selection of more than 50 of her latest works is shown to advantage at the MP Birla Millennium Gallery in the Bhavan Centre, a cultural venue in West Kensington, London. The pieces, mainly acrylic enhanced by other media, exert strong visual impact and emotional pull. Often the colours are more subtle and mellow than one comes to expect after seeing bright tourist photographs of the region. The people – mainly women – are totally at ease with themselves, melting beautifully into their gorgeous get-ups, whether engaged in chitchat in a courtyard or dancing in unison, weaving or fashioning handicrafts.

Namita’s exhibition was formally opened by James Horton, president of the Royal Society of British Artists, who is himself an enthusiast for India and spends much of his time there with painting groups. He praised the “lovely work” of Namita. 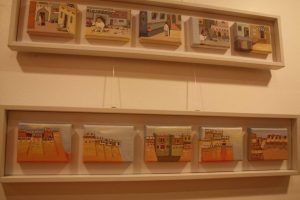 Mr Horton recalled being at a gallery event in New Delhi when an Indian speaker scolded his compatriots for being ‘townies, ’ that speaker going on to say: “It takes an Englishman to come here and show us that we know nothing of our own rural territories.”

Commented James Horton: “I was stunned by the colour and the architecture [of India], but it was curious to hear this man chastising everyone for not taking interest in their own cultural background.”

Despite the fantastic development of technology, the British artists’ president said, you do not have to go far to find rural communities living the way they have done for hundreds of years. It was very reassuring that people did not need “the values of the 21st century.”

For this reason he was pleased that Namita was taking up the traditional themes of India: “the subject matter is inexhaustible, ” he said.

Introduced at the opening reception by gallery administrator Darshana Vora, the artist in her statement for the exhibition said: “The desert land of Rajasthan is truly a very inspiring place.  People live life to the fullest and happily in the most trying and testing conditions. You get a feeling of being thrown in a sea of colours on which you would want to float and swim endlessly.” 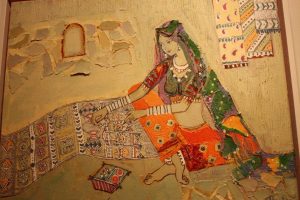 She is captivated by the architecture of the forts and palaces built for Rajput warrior clans, and of humble homes. To showcase the buildings, she creates ensembles of five small panels and deploys pastel shades.

Namita studied and developed her versatility in art forms at the Abhinav College of Arts, Pune, and later moved to London, where, she says, in artistic terms the sky is the limit.

She says:  “I love using fresh, bright colours, and applying different techniques with thin and thick palette knife and mixed media collage artwork, such as handmade paper, ink pen, fabrics, beads, with a blend of oil and acrylics.”  The beads glitter romantically on the women’s dresses as they dance or go about their chores, and sparkle on the harnesses of camels padding through the dunes.

As to influences, along with Western masters such as Degas and Monet, she is fascinated by the mixing of orange and pink hues by Amrita Sher-Gil (1913-41), who has been called India’s Frida Kahlo because of her bold choice of subject matter and her independent life-style. Namita has further admiration for the knack with colours of Indian master painters Madhav Satawalekar (1915 – 2006) and KK Hebbar (1911–1996). 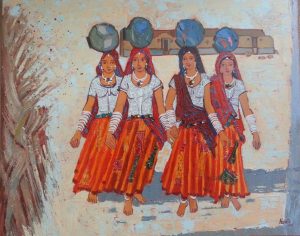 Walk to the River. By Namita Jain.

This is Namita’s third solo show at the Bhavan, and she has exhibited impressively in her native India. Commissions from clients including Indian restaurants keep her busy in London, and her work has been snapped up for several private collections.

Rajasthan is never far from her thoughts and her canvas. Every colour under (literally) the sun is there, and as Namita says, “Rajasthan is a delight: a buffet platter with plenty to choose from, for any artist.”

The Oil saga et al: History does not always repeat itself…

A WOMAN Secretary-General for the IMO!