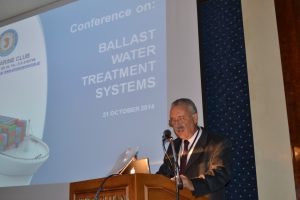 Markos Tripolitis, the president of the Chios Marine Club introducing the event

Markos Tripolitis, president of the Chios Marine Club, welcomed the audience, followed by the opening speech of the director of technical services in Hellenic and Black Sea region of Bureau Veritas, Dr. John Kokarakis. Dr. Kokarakis presented a brief update on the implementation schedule of the convention, current regulatory requirements and critical points for treatment systems to be considered from the technical and operational point of view.

During the first session of the conference  Tom Perlich of ECOCHLOR, represented in Greece by EUPLOIA DRY DOCKS AND SERVICES,  Andreas Toliopoulos of INTERNAFTIKI representing SUNRUI in Greece and  Eleni Plolychronopoulou of ERMA FIRST presented the technical aspects of their systems. The technical manager of Minerva Marine,  Stavros Daniolos was the moderator for this session. 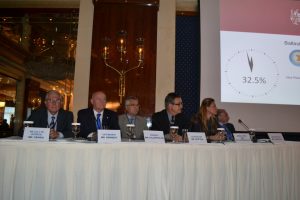 During the second session of the conference,  Tom Kennedy of OPTIMARIN, represented in Greece by AEGEAN DYNAMIC SERVICES, and  Markos Vekris of OCEANKING representing in Greece NK CO (KOREA) presented the technical aspects of their systems. In this session, the senior auditor of Hellenic Lloyd’s, Panagiotis Kamarados was the moderator.

The conference was attended by some 280 people, mostly executives from maritime and technical companies, and students from the University of Piraeus. Overall, this was a useful opportunity to become informed about the challenges the shipowner will face when called to choose from the available ballast water treatment technologies, and to make a comparison between the treatment systems that the five companies presented. 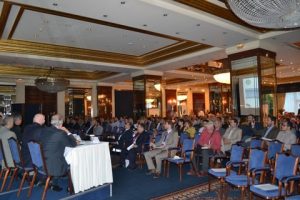 A view of the delegates; a full house!

The shipping industry is expected to face difficulties in certifying the systems fitted on board, according to the panellists, because of a lack of sufficient number of classification society surveyors. However, all panellists agreed that there will be enough production capacity, as far as their companies are concerned, to cover the vast demand for purchasing and retrofitting such systems on board ships when the convention enters into force.