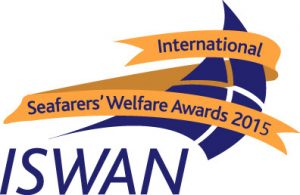 The International Seafarers’ Welfare Awards 2015 are being launched today. For seafarers, the backbone of the industry, welfare services and facilities can be a life line when working away from home for long periods of time.

These awards recognise excellence in the provision of welfare services by shipping companies, welfare organisations, ports and individuals – on ship and ashore. They showcase good practice in the industry, and highlight the commitment and dedication shown by many – in the service to seafarers.

Roger Harris, Executive Director, International Seafarers’ Welfare and Assistance Network said “Seafarers make a massive contribution to all of our lives. Without them global trade would grind to a halt. They deserve to have excellent welfare services and facilities wherever they are in the world. These awards recognise the considerable efforts that organisations and individuals make to improve the lives of seafarers.”

Sponsors of the awards include Crewtoo, Wrist Ship Supply, and Garrets.

The awards are funded by a grant from the ITF Seafarers Trust.

Visit www.seafarerswelfareawards.org to find out more and to make a nomination.

PDF’s of the poster and leaflet promoting the awards can be downloaded.