Cautious optimism that shipowners and shipbuilders have learned the lesson of the “overcapacity years” was expressed by Jim Davis, chairman of the International Maritime Industries Forum, in his remarks at the organisation’s annual dinner for 2014. 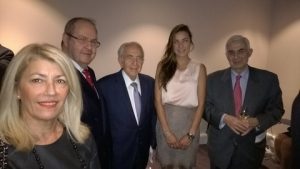 Speaking at the Radisson Blu Hotel Portman Square, Mr Davis contrasted the “lemming-like” enthusiasm for building ships with the restraint that appeared to have gained hold lately. Many in the industry had realised “we are all in this together.” Shipping had been growing in a dangerous way but “we have tried to make sure we do not repeat the mistakes of yesteryear.” 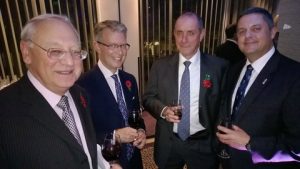 The chairman referred to the dictum of the philosopher George Santayana: “Those who cannot remember the past are condemned to repeat it.” Mr Davis commented: “It is a very wise saying. We have to remember – please do not let us get into the silly state of so many years ago.”

After the years of over-supply, shipping was now much more stable, but he urged no-one to lose sight of a potential return of the problem. 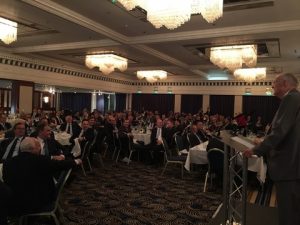 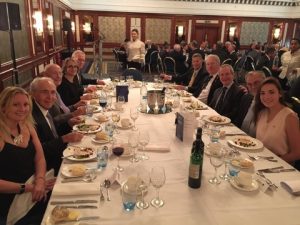 Mr Davis struck an emotional note as the audience warmed to his paean to the shipping industry at large. He said: “I have been in it for over 60 years, and there is no profession which has the same romance, friendship and charm as the shipping industry. I realise that I have been very lucky to have spent all this time in it. I have so many friends engaged in the transport of goods around the world by sea, and it makes for a camaraderie above any other profession.” 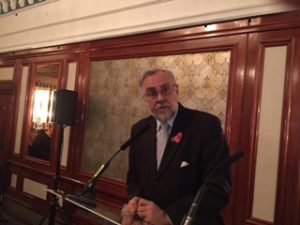 The Danish Ambassador to the UK, His Excellency Claus Grube responding

He was followed to the rostrum by the Danish Ambassador to the UK, His Excellency Claus Grube, who responded on behalf of the guests of the evening.  The ambassador spoke of his family background in shipping , and of the flap he caused among the British press when he had joked in an interview that it was the Vikings who introduced their sense of humour to the British. 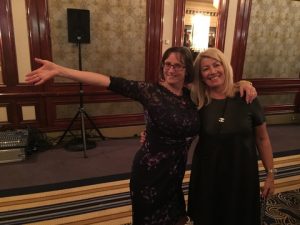 In a jubilant mood, Bridget Hogan (pointing to table one) with Anny Zade

Mr Davis praised Victoria Mott for her part in the splendid organisation of the event. Quiz * winners were the diners at Table One, and Bridget Hogan, director of publishing and communications at the Nautical Institute, received a prize on their behalf.

Members of the Women’s Shipping & Trading Association were a notable presence at the event, with WISTA-UK president Maria Dixon deploying her customary networking skills. Ms Dixon is a loyal supporter of IMIF, and indeed Mr Davis is one of several honorary ambassadors for WISTA-UK. 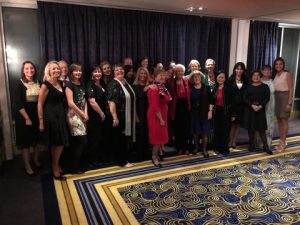 The dining had been prefaced with grace said by Archbishop Gregorios of Thyateira and Great Britain.