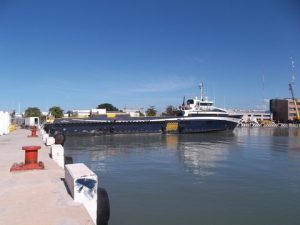 The 462 gt offshore support vessel “Lluavi” is one of the ships that transferred to ClassNK
this year.

Tokyo – Leading classification society ClassNK (Chairman and President: Noboru  Ueda) has announced the expansion of its Veracruz Office in order to better support the  growing offshore oil industry in the Gulf of Mexico. The expansion will increase the  survey capabilities and management of the Veracruz office in response to growing demand from the offshore sector in the region.

The liberalization of Mexico’s offshore industry is driving increased interest in Mexico’s growing offshore sector. Over the past year, a number of major vessel operators have increased the size of their fleets in the region to take advantage of new exploration and production opportunities. ClassNK is expanding its operations in the region to support
these efforts.

Founded in 2004, ClassNK’s Veracruz Office is one of 11 ClassNK offices in North
America, and one of three of the society’s offices that supports vessels in the Gulf of
Mexico. While the Veracruz Office has traditionally provided classification and
certification services to the ocean going vessels calling at Mexico’s ports, the growing
number of NK-classed offshore vessels in the region spurred ClassNK to expand its
local operations.

According to ClassNK Chairman & President Noboru Ueda the move reflects recent
efforts by the class society to better support the industry: “As we’ve increased our
support for the offshore and workboat sectors, our share in those markets has rapidly
grown. OSVs and other workboats accounted for nearly 25% of the vessels added to
our register in 2013, including a number of Mexican-owned vessels transferred from
other classification societies. The expansion of our Veracruz Office not only reflects this
growth, but also represents the next step in our efforts to support this vital industry.”

RescueSim User Conference gathers safety professionals from around the globe