Hashemite Kingdom of Jordan accedes to the IMSO Convention 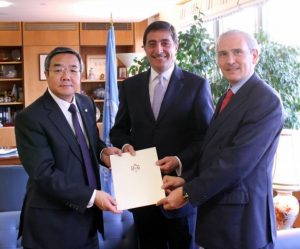 Captain Pacha expressed his appreciation to Mr Sekimizu who paid tribute to the key role played by IMSO in maritime safety and security. As the theme of the IMO World Maritime Day 2014 is “the effective implementation of IMO Conventions”, the accession of Jordan to the IMSO Convention is timely and a welcome reminder to all States of the importance of all IMO Conventions, which ensure that fair and equitable rules are at the forefront of maritime safety.

Captain Pacha formally welcomed the Hashemite Kingdom of Jordan to the membership of
IMSO and takes this opportunity to express his satisfaction for the increased interest of nonmember
States, which are considering or in the process of joining IMSO, in the activities of
the Organization.

Captain Pacha continues to promote the values of IMSO and to encourage both Member
and non-member States to be actively involved in the activities of the Organization.

At last: the Security Institute Manifesto