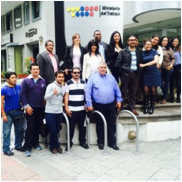 In a long meeting at the Ministry of Labour, trade union leaders representing workers at LAN Peru, Chile, Argentina, Colombia and Ecuador met Ecuador’s Minister of Labour to seek government mediation in attempts to secure the reinstatement of Ximena López after she was illegally dismissed in October this year. Ecuador’s Minister of Labour declared himself to be “one more soldier in this fight” and agreed to ask the company to comply with the Constitution and reinstate the leader.

Ecuador’s Minister of Labour, Dr Carlos Ernesto Marx, told a delegation of trade union leaders representing workers at LATAM Airlines Group in Peru, Chile, Argentina, Columbia and Ecuador, and Edgar Díaz, Assistant Regional Secretary of the International Transport Workers’ Federation (ITF), that he would speak to LAN Ecuador managers about the reinstatement of Ximena López, General Secretary of the Aerolane Workers Trade Union (SITA), who was arbitrarily and illegally dismissed by the company on 14 October this year.

At a meeting that took place on the top floor of the ministry in Quito, the minister received a delegation of at least 20 union leaders, including Ximena López, representing LAN employees in South America.

The trade union leaders explained their point of view about the company’s anti-trade union action and also pointed out the lack of a collective agreement at the company. This was backed up by Edgar Díaz, representing the ITF’s regional office.

The minister responded by promising, on behalf of the government, to mediate in the dispute and to ask company representatives to respect the union’s right to organise workers at LAN Ecuador. It is therefore hoped that there will be significant progress in the short term regarding the reinstatement of Ximena López and the negotiation of a collective agreement.

INTERNATIONAL ACTION
The unfair, discriminatory and sexist dismissal of Ximena López is a key case for trade union leaders throughout the region. They see it as a blatant and unpunished attempt to intimidate union members at the Chilean owned airline, which has a presence throughout Latin America.

Ximena López is a leader of international importance inside the company who, in addition to founding the union that organises LAN workers in Ecuador, is a prominent activist on labour rights, gender equality and in the organisation of the ITF’s LATAM network. Her dismissal triggered international solidarity action, resulting in flight delays, letters and protests at embassies in all the countries where LATAM Airlines operates.

Ximena López said the meeting was positive and raised hopes for her reinstatement. “The minister agreed to support us and to ensure compliance with the Constitution. He said he was one more soldier in this fight and so we are very hopeful that he will put into practice the government’s policy of protecting trade union leaders, especially those representing responsible trade unions. The minister is very supportive of this type of organisation. I am almost sure that there will be a positive response”, said López.

The ITF’s Assistant Regional Secretary agreed with López’s assessment of the meeting and said that the federation will be closely following the case. “The result was very important for the ITF. We succeeded in getting the Minister of Labour to agree to meet LAN’s local management and request the reinstatement of our colleague Ximena López. We think this is an urgent case and there is no doubt that we will continue to give this case the attention it deserves. We will follow events closely and look forward to being informed of the date for the minister’s meeting with LAN managers so we can follow up with our own action”, said Edgar Díaz.

Darío Castillo of the Federation of Trade Unions at the LAN Chile Group (FETHLAN) said there could be a successful outcome but that the unions should continue to keep the pressure up on this case. “We had to work hard to get the minister to agree to meet with LAN. He has never shown himself to be especially interested in the workers’ request. But after union pressure, he agreed to our request to meet LAN and seek the reinstatement of Ximena. We are hopeful, but this also depends to some extent on the unions continuing to put pressure on”, said the Chilean representative.